The UFC did everything they could to ensure a title fight would happen at UFC 206, but ultimately they failed. Anthony Pettis missed weight earlier today in Toronto, and while his fight with Holloway is still on, it is no longer for the interim featherweight championship.

Pettis stormed off the stage after weighing in. While he was given more time to take the weight off, it appears he will be unable to shed the extra 3lbs.

This was to be Pettis’ second fight in the division, after defeating Charles Oliveira back in August. He dropped down to 145lbs after 3 consecutive losses at 155lbs, including losing the lightweight belt to Raphel Dos Anjos at UFC 185. Pettis had defeated Benson Henderson for the lightweight championship at UFC 164, and defended it successfully against Gilbert Melendez at UFC 181.

Currently there is no word on how this will impact the winner of Holloway/Pettis moving on to face Jose Aldo.

Anthony Pettis, according to sources, is having a lot trouble making weight. As of now, it looks like he won’t make 145. Stay tuned.

This is just the latest in a series of set-backs for the UFC 206 main event slot. Originally thought to be the event which would feature the return of Georges St. Pierre, 206 also lost the planned rematch between Daniel Cormier and Anthony Johnson. Cormier was forced to pull out due to injury just two weeks before the bout.
When that fight fell through the UFC controversially made Holloway vs Pettis for the interim featherweight belt. This despite the fact that current champion Jose Aldo last fought in July and is expected to fight again in February or March.

The undercard for UFC 206 is stacked however. The event benefitted from a couple of cancelled bouts from UFC 205, including Tim Kennedy’s scrapped bout with Rashad Evans. Now Tim Kennedy will take on Kelvin Gastelum, who will be looking to make an impact in the middleweight division after failing to make weight at welterweight on 3 occasions.
One time sparring partners Matt Brown and Donald Cerrone will square off in an important welterweight fight. Brown seems to have a grudge with Cerrone as well, referring to him as a “bully” and a “douche” earlier this week.

Here are the rest of the results from today’s weigh-ins: 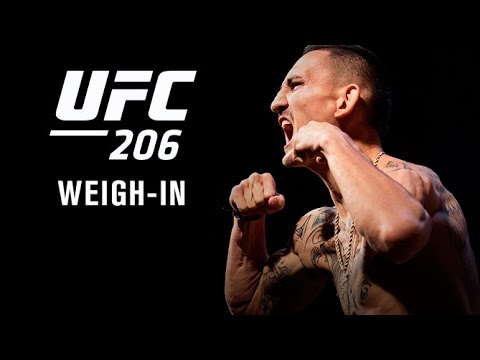 Darren - Mar 24, 2019 0
Is There Anything Better Than a Clean Knockout? Well, Lucky Viewers Were Given an Incredible One at the Weekend in Poland, When One KSW...

Kamaru Usman gets the best over Colby Covington in the REMATCH

WATCH: Fedor Emelianenko vs. Matt Mitrione Ends in Round One