Following a controversial judging decision at UFC 167, Dana White wasted no time laying into both the judges and GSP at the post-fight press conference.

The main event that night was the infamous Georges St. Pierre vs. Johny Hendricks welterweight title fight, that many scored in favour of Hendricks but the judge’s awarded to GSP via split-decision.

After the fight was over, GSP announced that he wished to take a break from the sport and would be stepping away. GSP did not say he was retiring or forfeiting the title, just that he was taking a break.

White was upset that Georges would say he is walking away after such a controversial decision, believing that he had a responsibility to the fans and to Hendricks to defend the title. This was also the fight where Hendricks refused to participate in advanced drug-testing despite GSP offering to pay for it. GSP would officially vacate the title shortly after. 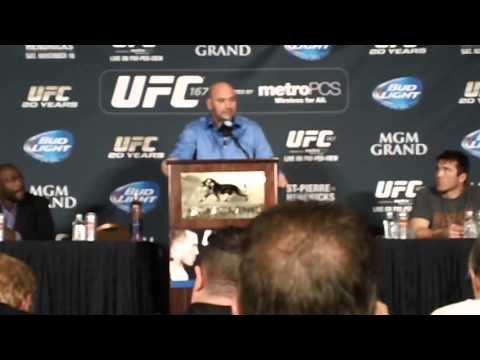 Salvador Sanchez - Jun 15, 2016 0
Hope it was worth it! Boxing is a tough sport at the best of times, let alone when your opponent is trying to eat you....

Dad Teaches His Son Hard Lesson For Being School Bully