Take a journey through the weird and wonderful world of JMMA…

Many years have passed now since the golden age of MMA in Japan. The Far East used to be the Mecca of mixed martial arts, but times have changed since then. After the fall of Pride FC, JMMA was never really the same.

Although many Japanese promotions are now starting to rekindle the flame, the US scene currently dominates the market. Housing pretty much all the major players, the UFC is where most fighters aspire to compete.

Among many other popular moments in JMMA, freak show fights were huge at the time. Much like the cinematic icos ‘Godzilla’ or ‘King Kong,’ the nation idolized these gigantic beasts who fought in the ring.

Back then it wasn’t necessarily about rankings, but more about pride and honor. Fans loved to see smaller fighters challenge these gargantuan behemoths. One particular fight showed just how far that fascination could go.

Genki Sudo vs. Butterbean (Video Below)

Featuring a staggering 270-pound weight difference, Butterbean vs. Genki Sudo was one of the craziest pairings. Although we’d grown accustomed to this type of thing, it really is wild to see.

Watch as Genki Sudo battles Eric Esch in a crazy fight in Japan. This was Butterbean’s MMA debut!

Even though he didn’t have glimmering success in the MMA world, Butterbean was a boxing beast. Between 11993 and 2013, Esch posted a 77-10 boxing record with 58 wins coming by way of knockout.

Combined, Esch’s fight record stands at 97-24-5 with 66 knockouts and 10 submissions. By anyone’s standards, that’s damn impressive, and includes a stint in kickboxing too. Despite having spent so much time fighting, Esch also works behind the scenes on various combat sports promotions, helping pave the way for the next generation of fighters.

Before we go, here’s a highlight of Butterbean’s savage knockout power! 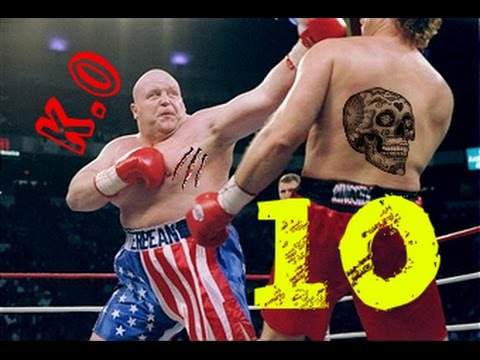 Darren - Apr 2, 2018 0
Conor McGregor Finally Releases Statement on UFC 223 Situation and it is Crude... April 7th was meant to be the day that Conor McGregor was...

Importance of Sports in Student Life

WATCH: Chuck Liddell Clowns Guys Half His Age In The Ring