On January 19, 2008 at UFC 80 the vacant lightweight championship was on the line when former welterweight champion “The Prodigy” B.J. Penn squared off against former Ultimate Fighter Winner and top contender Joe “Big Daddy” Stevenson.  After an impressive 4 fight win streak, Joe Stevenson earned a shot at the vacant title when Sean Sherk was stripped of the title when he failed his post- fight drug test.  The fight took place in England and was quite the spectacle as Penn and Stevenson both brought everything but the kitchen sink into the octagon.

B.J. Penn used his speed and boxing skills to really set the pace against Stevenson.  After the first round Stevenson returned to his corner with a nice gash on the forehead that was just beginning to open.  At the start of the second round “The Prodigy” scored a takedown and began to pummel the forehead of “Big Daddy” .  After just a few second Penn connected with a good shot to the cut which caused the wound on Stevenson’ s head to really start bleeding and eventually caused his face to be covered in blood.  What the fans saw witnessed that day was BJ Penn at his finest.  After exposing Joe Stevenson, B.J. Penn was able to bloody up his opponent until he reached for the rear naked choke that finished the fight in the second round. 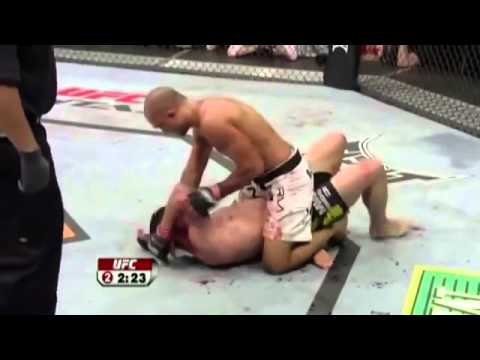 Darren - Apr 23, 2019 0
This Could Only Happen in the Sunshine State... Watch as the Easter Bunny Defended an African-American Woman by Beating Up a Florida Man...  In one...

Khabib is Ready to Beat Tony Ferguson in Russian Stadium