As expected, Islam Makhachev beats Thiago Moises easily. It is the first main-event for Makhachev’s UFC career and more to come. He dominated in the early rounds pretty easily, showing not only his wrestling but also his striking.

In the early rounds, Makhachev tried to get Moises’s timing and tried to throw his strikes. Moises did good in the early parts of the fight, not trying to be too aggressive but once Makhachev got a hold of him, he had no answer. Makhachev was clearly the better grappler.

It was pretty much a one sided fight and slowly Makhachev secured a rear naked choke in the fourth round that stopped the fight. It was also interesting that they went to the championship round as to prepare Makhachev’s endurance in fights that go past three rounds.

After the fight, Makhachev called out Rafael Dos Anjos. Both were scheduled to fight in the past but RDA pulled out of the fight due to testing positive for COVID. The UFC then tried to rebook the fight but it was Makhachev that pulled out due to a staph infection. Will RDA take the fight against someone as dangerous as Makhachev? 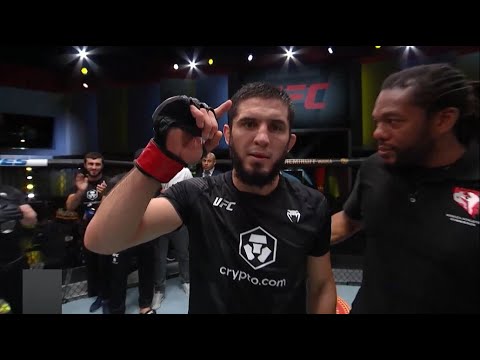 Makhachev has a lot of hype around him especially considering many are comparing him to his teammate, Khabib Nurmagomedov. It went as far as fighters ducking him mainly because he is such a high risk, low reward fighter. The contenders look at him as Khabib but lower ranked, so who would want to fight him?