Yes, Bellator MMA is slowly sliding in to the realms of pro wrestling, and Kurt Angle is the latest WWE star that says he’s going to possibly fight Kimbo Slice…

Brock Lesnar is probably the most well known pro wrestling to mixed martial arts crossover in history. He isn’t the only one of course, but he definitely had the most success when he left the WWE for the UFC.

The giant ex-WWE champion moved to MMA in 2007, and soon gained a reputation in the sport. Making his UFC debut at UFC 81 after just one fight, Lesnar found out the hard way it takes more than just size and strength in actual combat.

After being submitted by Frank Mir at UFC 81, Lesnar would go on to become the heavyweight champion. Although he left the sport on the back of two very ugly TKO losses, the WWE superstar opened the door to more future crossovers.

CM Punk, although yet to make his debut, has signed to the UFC and Bobby Lashley has had some success as a mixed martial artist since Lesnar’s influence.

But now there’s another potential transition from wrestling to MMA, and that’s former WWE champion and Olympic medallist Kurt Angle.

Yes, Bellator MMA part time commentator Kurt Angle has dropped some big names in reference to his highly likely MMA debvut. Check it out, from TMZ: 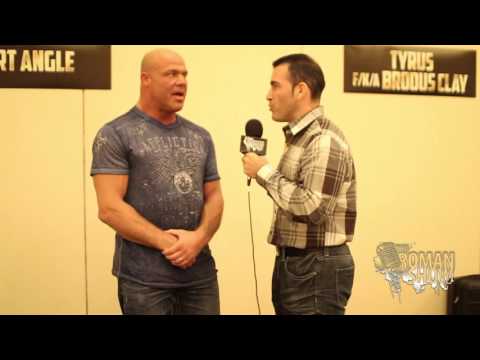 “Of course, I’m not going to fight a guy in their prime,” Angle said … “It’s obviously gonna be one of the older guys. But if it does come to fruition, it’ll be a helluva fight, whether its Kimbo Slice, Ken Shamrock, Dan Severn … or even Royce Gracie.”

WATCH: Bob Sapp’s Return Fight Was… Not So Great

Atilano Diaz - Aug 5, 2017 0
It seems like ages ago that Bob Sapp, the man known as “The Beast”, was actually someone to look out for. Whether in mixed...

WATCH: Former UFC Fighter Gets Knocked Out in 9 SECONDS

Anderson Silva Might Still Fight At UFC 212, But Not At...