Former Strikeforce and current Invicta FC featherweight champion Cris Cyborg is a scary lady. Pegged as the most avoided woman in combat sports, she’s often been the point of hot debates and arguments.

After a failed drug test in the Strikeforce days, Cyborg was blackballed by the UFC, but it didn’t stop there. For years the promotion danced around the idea of Cyborg joining to fight Ronda Rousey.

Finally joining the UFC in 2016, Cyborg was too late to get in on the Rousey fight. Stringing together two straight knockout wins, Cyborg then faced the difficulty of which weight class to fight in.

Apparently unable to cut down to even 140 pounds for catchweight, Justino appealed for a women’s featherweight division.

The 145-pound division did arrive, but it was a bizarre sequence of events. Fighting for the inaugural title were Holly Holm and Gemrain De Randamie, and they put on a boring/controversial contest.

After UFC strawweight Angela Magana posted some rather offensive Tweets about Cyborg, you just knew something was going to happen. Cue the UFC fighters retreat, and a confrontation that has lid social media ablaze.

First off came the reports that Cybrog had punched Angela Magana, whom she outweighs by some 30 pounds, during a heated confrontation in Las Vegas. Now, thanks to Cage Pages on Youtube, that scuffle is available to watch: 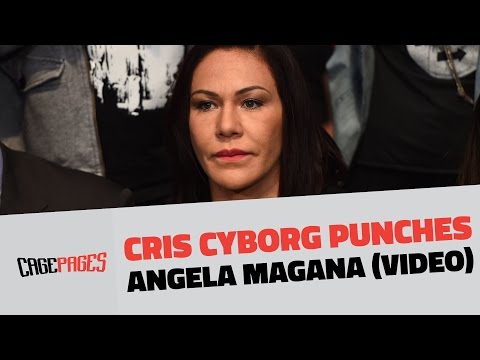 Per TMZ: “Cops say Magana — a 33 year old UFC strawweight — transported herself to the hospital and was treated. According to the narrative, a doctor at the hospital diagnosed A.M. with an “acute head injury, cervical strain, and laceration of the lip.”

She returned to her hotel room and called cops.”

As well as pressing charges, yes police charges, Magana has been going off on social media:

@nikel18 Cyborg used all the roids and cried for a lawsuit and charges when Ronda stated this. #usupposedtobesmarterthanthatfool

@michaeljb1 Never called the cops. The injury described and other things

@EricBussman How many millions of people rallied being Hitler? Does that mean he is right? ????????

@nikel18 Why you talking shit to me. U Gonna walk the walk bitch boy? You obvs have momma issues

@Rezzardi69 @MusubiMan808 @bubble_burster1 Not random, what does what she did that day have anything 2 do w her face and Billy. Your arms sore? Cuz you really reaching on that ????????

Talk shit get hit, then felony charges on your ass. And no more job!

Dana White: Tony Might Not Get the Next Title Shot