MMA fighters are some of the most dangerous people on the planet. They have skills from a wide variety of martial artists, allowing them to quickly respond to physical threats and be in phenomenal athletic shape at the same time. That’s why if you knowingly mess with somebody who has had a lot of training, you’re an idiot.

We’ve all seen loads of videos of absolute morons trying to fight MMA stars. It just doesn’t work out well for them at all. They all end up getting brutally battered and taught a lesson that they’ll never forget. But sometimes the situation is more serious. Ask UK fighter, Louis Nicholson.

He was set upon by a gang of eight knife-wielding attackers – yet miraculously managed to fend off his attackers and live to tell the tale. Scroll down to read his full account of what went down. 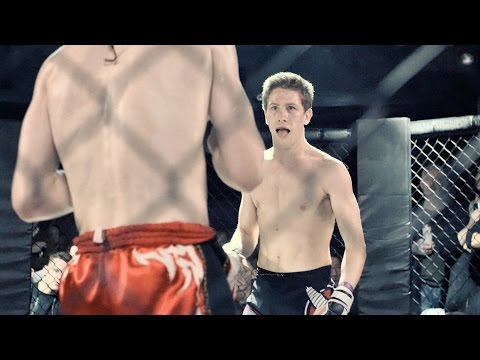 Louis Nicholson is from Essex in the South of England. He trains in London’s Diesel Gym and also does 10th Planet Jiu-Jitsu. He’s an amateur fighter, as well as a coach at TSG MMA Fight School. He was able to put his skills to good use when he was set upon by eight thugs. The 22-year-old explained what happened when they decided to rob his phone:

“I’m walking through Seabrook Rise in Grays minding my business when eight people decide they wanted to liberate my hard-earned possessions from me.  Long story short I said I was ready to fight them because I was not going to give them my things – it was probably a stupid move, I realise that now.”

“So anyway, we start fighting – it was one person against eight, baring in mind. I was doing my best to keep them at bay even manage to punch two of them in the face so they dropped to the floor. Anyway, at this point, the absolute cowards decide eight versus one isn’t a big enough advantage for them. So they pull out there blades and start stabbing and slashing at me while I’m trying to fight off the others.”

Being a violent gang, they decided that having the numerical advantage wasn’t enough. So they pulled out knives and started slashing at the young, brash fighter. This left Nicolson with numerous cuts and slashes across his body, and he was forced to be hospitalized. He explained:

“I got away with all of my stuff. I was fighting them and they had me circled then one of them broke the circle like a coward when I went to swing for him so I ran out of that gap he created. I ran in a building site that was open at the time and shouted for the blokes to call the police. And the funny thing this all happened at four o’clock in the afternoon in broad daylight.”

“I have to say though that with zero shadows of a doubt martial arts saved my life. I would not be here if not for being able to create space and get out of there.”

In Nicholson’s opinion, his training was what saved his life. He believes that while it was stupid of him to take on eight guys at once, his martial arts abilities gave him the edge because they just did not expect such an aggressive reaction. He said:

“So honestly get your kids trained in martial arts, I can not stress it enough, it is literally a matter of life and death – stay safe everyone.”

This guy is a badass. Police in Essex are investigating the attack and Nicholson is set to make a full recovery. Good luck man!

jason - May 4, 2016 0
Muay Thai kicks are no joke. Muay Thai training in Thailand has a reputation for the exhausting training sessions in an extremely hot environment. Kicks,...

David vs. Goliath MMA Fight Ends With One Punch

Eleven MMA Fighters Who Competed at the Olympics