As UFC 223 approaches, there’s been a lot of debate surrounding the UFC lightweight title. With Tony Ferguson still officially the interim champion, Dana White recently refused to confirm if Conor McGregor had been stripped…

Interim champion Tony Ferguson and undefeated phenom Khabib Nurmagomedov will (hopefully) collide at UFC 223. Having already been scheduled to fight multiple times since 2015, fate has led the two top lightweights to an April 17 date.

While many fans acknowledge this bout will essentially decide the undisputed champion at 155 pounds, it’s not officially that simple. UFC president Dana White, although he had already confirmed he would strip McGregor if he couldn’t fight by March, would not confirm which title was actually on the line at UFC 223.

The reasoning behind having an interim title in the first place is basically to confirm the number one contender for the undisputed champ. Just going on logic, you can’t defend an interim title.

Pick a Title, Any Title

While McGregor remains engaged in contract negotiations with the promotion, Ferguson vs. Khabib has been made official for UFC 223. Nobody knows which title will be on the line, but this could be due to the fact this fight has fallen apart many times.

Should the UFC strip McGregor before the day of the event, they could face complications similar to when they stripped the Irishman of the featherweight title. A mess indeed, but Nurmagomedov offers some insight that could clarify things:

“McGregor Has Been Stripped”

Contrary to what Dana White says (shock!), ‘The Eagle’ says ‘The Notorious’ has in fact already been stripped, as per TSN:

“(Ferguson is) still interim champion, but when we fight, it will count as real belt. This is what will happen,” Nurmagomedov said.

“They stripped (Conor’s) belt at lightweight, they stripped his featherweight belt.” The fighter continued. “(Me and Tony) are going to fight for the real belt and that’s it. I don’t understand why media people keep talking like, ‘did you strip him or no?’. Of course UFC stripped him.” 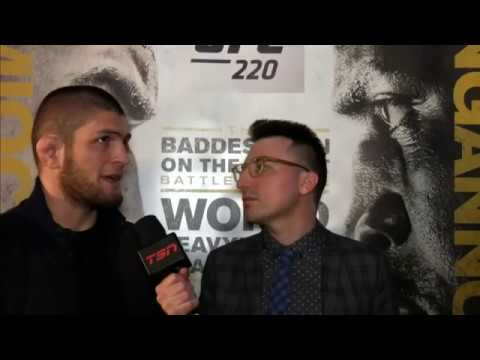 Where Ferguson is concerned, the interim (?) champion is not so sure of proceedings, as per The MMA Hour:

“Yeah it bothers me. I’m the fucking champ and we don’t know if we’re fighting for the real belt or not,”

“Dana White is telling us one thing one side of the curtain, and on the other side he is saying, ‘No, Conor McGregor is the champion.’ Go and do your homework, there is an interview out there. I love Dana, but I’m like, ‘What the fuck dude? Am I or am I not the champ? Do you want to hype me up or do you not want to hype me up for this fight?’” Said a clearly frustrated Ferguson.

Salvador Sanchez - Nov 20, 2017 0
UFC welterweight champion Tyron Woodley is not giving up on his crusade to fight Nate Diaz. During his latest rant, 'The Chosen One' sent...