UFC 218 was a massive night for red-hot heavyweight prospect Francis Ngannou. Fighting for the first time in a co-main event of a pay-per-view, Ngannou faced the toughest test of his career so far.

Across the Octagon from ‘The Predator’ was world class striker and former K1/DREAM/Strikeforce champion Alistair Overeem. Ngannou made it a short night and a brutal one at that.

Connecting with one of his world record-holding punches, Ngannou scored one of the most iconic knockouts ever. As Overeem laid stiff and asleep on the canvas, it was clear a star was born in Ngannou.

‘The Predator’ was immediately launched into the title picture, with the UFC all to receptive to his requests. Soon it was confirmed that Ngannou would face Stipe Miocic in the first PPV of 2018, UFC 220.

Ngannou’s Power is Like Getting Hit by a Car…

Prior to UFC 218, Ngannou set the world record for the hardest punch ever recorded. It was filmed at the UFC athlete facility in Las Vegas, Nevada, and the fans loved it. Already having a cult following, the record followed by the devastation of ‘The Reem’ catapulted Ngannou into the limelight.

The promotion put on a press conference to preview UFC 220: Miocic vs. Ngannou, last night. Needless to say, there was a lot of talk about the title contender. Also present were Daniel Cormier and Volkan Oezdemir. 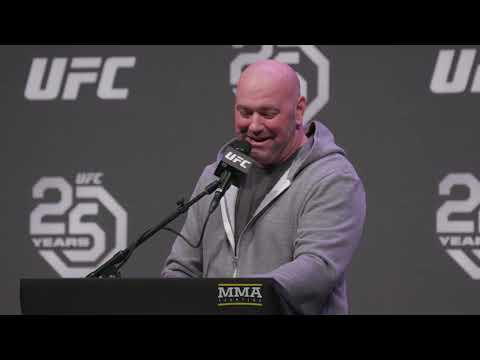 Needless to say, the prospect of facing a man who whacks that hard would have any normal person quaking in their boots. As for Miocic, he says it’s all part of the game and he fears no man, H/T MMAMania.com:

I Fear No Man

“Francis is an amazing fighter,” Miocic said. “He’s got great power, he’s very athletic, and he’s a big heavyweight. He’s definitely showing it and that’s why he’s here. Good for him,” Miocic said. “He got the win. That’s an easy night. Those are the best nights when the fight is done early. You go home unscathed.”

“No, that’s what I signed up for,” Miocic said when asked if he’s intimidated by Ngannou. “Why would I be intimidated by another man? There’s a reason why I’m the champ.”

“I think he’ll try to survive,” Ngannou added when asked if Miocic will stand with him. “Whatever he’s going to try I’m going to catch it. And then I’m going to connect. You know what happens when I connect.”

Conor McGregor’s loss was KARMA being a MIRROR

WATCH: Tim Kennedy Waterboards Himself to Show it’s Not Torture

WATCH: Donald Cerrone Shows Why He is a UFC Legend