It’s almost here. Conor McGregor and Donald Cerrone will fight tomorrow in Las Vegas. If you didn’t think fans were excited then you haven’t been paying attention. The noise for McGregor’s weigh-in was as loud as ever before. The fight is now official after both men made the 170lb limit.

McGregor is seeking redemption after tarnishing his name. The Irishman has been on his best behavior all week. He even apologized for arriving 30 minutes late to the ceremonial weigh-ins. Can you imagine him doing the same thing a year ago? The charm offensive is in full force.

The former featherweight and lightweight champion looked in great shape when he stepped onto the scale. Check out his intense staredown with Cowboy. As he has said all week: ‘there will be blood, but it won’t be bad blood.’ This is set to be an incredibly exciting fight. We can’t wait for it. 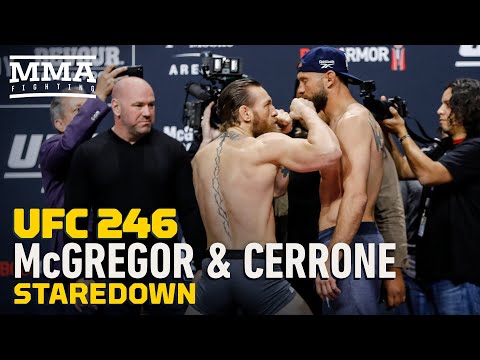 The two men were greeted with cheers from a filled pavilion. They both made weight and looked in great condition. It’s interesting how big McGregor looks next to Cerrone, although the latter will probably fill out a bit more with water before the fight. You imagine that The Notorious is at his maximum right now.

Meanwhile, their actual staredown was intense and focused. Both men maintained the respect that they’ve shown throughout the entire build-up of this clash. Now the fight is official and we can get down to the real business. Who do you think will win? 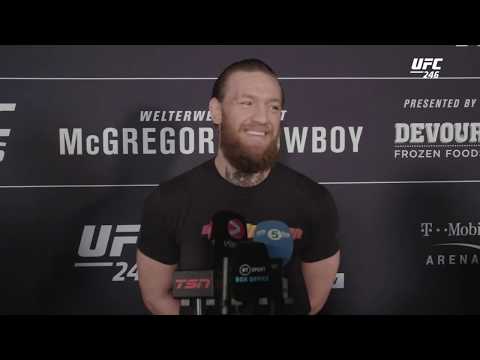 According to John Kavanagh, McGregor is very happy right now. It makes a huge difference when you don’t have to cut a lot of weight. The Irishman looked like a meth addict when he was at featherweight. In sum, he looks very different now at a career heaviest 170lbs. He actually came in underweight for both of the Diaz welterweight fights.

“The final two weeks were about calorie deficit and sometimes things could get a bit tetchy,” said Kavanagh. Instead of that, there’s dancing, music is playing, high-fiving and smiling. It’s a slightly different way of doing things. At 170 there are no weight cuts. Every fight is different and this is different in a different way. But don’t get me wrong – the beautiful destruction will still take place.” 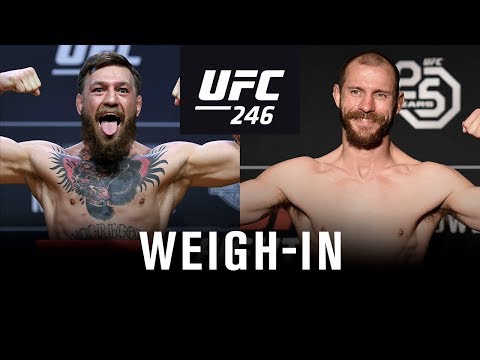 Of course, McGregor and Cowboy aren’t the only two fighting on this card. However, one bout was scrapped after Alexa Grasso came in 5.5lbs overweight. The Nevada Athletic Commission refused to sanction her fight with Claudia Gadhela as they enforce a 3lb limit. All other athletes on the card managed to make weight and do their job properly.

McGregor v Cerrone will take place in the T-Mobile Arena, Las Vegas. The result will have massive ramifications for both men. For the Irishman, it’s a step towards a rematch with Khabib Nurmagamedov or a BMF title fight with Jorge Masvidal. However, for Cerrone, it’s his last chance to regain momentum and surge towards the top. A loss will be devastating for them both.

Watch: Canelo vs. Cotto Full Fight Video & The War Being...

WATCH: One Of The Most Dangerous Submissions In MMA History Just...

Dana White Has Some Bad News About Conor McGregor’s Title