Is it really that difficult to save the violence for the ring/octagon? Terence Crawford and Joseph Benavidez Jr. have just had a nasty clash at their official weigh-ins in Omaha, Nebraska. The pair is set to fight on Saturday night at CHI Health Center and have developed a real and violent grudge.

Crawford is the WBO welterweight champion and one of the pound-for-pound best in the sport. He has accused Benavidez of trying to piggyback off his name and has promised to ‘beat the burritos’ out of him. Benavidez is cocky and aggressive but much less experienced than the champion. It promises to be an interesting and intriguing fight.

Things took a savage twist at the weigh-ins last night. Watch the footage below of the moment Crawford threw a punch at his challenger. 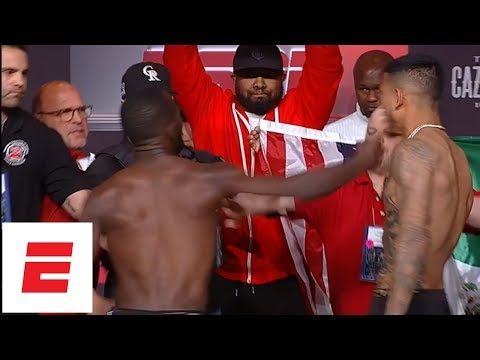 It’s unknown what Benavidez Jr. said to get such a reaction from Crawford. Whatever it was, it clearly rattled the Nebraska native, who threw a fast right hand straight at his challenger. Benavidez Jr. was able to roll with the punch, taking no damage and was able to laugh it off after.

“I’m in his head. And I hope he swings faster than what he swung today because I’ve seen that punch coming a mile away,” Benavidez Jr. said. “And I hope he puts more power into that too because that’s a b-tch punch he threw. I don’t see anything special in him.”

I’m hosting tomorrow’s #CrawfordBenavidez press conference and was told extra security would be present. Can’t remember the last fight week that I had to think about that. On another note, I feel like I’m not really going to need much in terms of questions though lol 🗣🗣

This really wasn’t unexpected though. Extra security was called in for this event and you can see them move in very quickly. This is a real grudge, not some fake narrative created to drive up ticket sales and viewing figures. Benavidez Jr. shouldn’t be surprised by Crawford’s reaction. The Nebraska champion was entertained by the UFC 229 brawl, explaining to ESPN:

“Oh man I loved it. I actually tweeted after that fight, and I was asking everybody why they’re mad at him (Khabib). When a guy talks as much as Conor was talking about him and actually threw something at the guy’s bus and hurt people, of course it’s going to be personal. They should’ve expected that.”

Protect yourself at all times. Good Night Everyone!!!

This might be the worst thing that Benavidez could have done. Yes, Crawford is rattled emotionally, but fighters like Jeff Horn, Dierry Jean, and Hank Lundy have all tried to do the same thing to him in the past. It didn’t work out well, bringing out an even nastier side in a boxer ranked in the top-three P4P best by almost every media publication in the world.

His length, speed, power, and precision have all been unmatched so far in the division. He has an exceptionally fast pair of hands and switches between stances easily. This could be a long night for Benavidez Jr. He might think he’s won the psychological battle, but more than likely he has just awoken the sleeping beast inside Crawford.

Salvador Sanchez - May 27, 2016 0
Watch the video... Bullies are a plague to society without doubt. When it comes to videos that are satisfying to watch, few can deny the...

Having A Bad Week? This Video WILL Cheer You Up

The Boogeyman of The Featherweight Division Just Challenged Conor McGregor