Drawing closer to the August 26 date and all eyes are on Floyd Mayweather and Conor McGregor. Ahead of their scheduled boxing clash this Summer, Mayweather and McGregor have been all over the headlines.

We perhaps didn’t see the real picture during the four-day world tour. Fans who’ve followed combat sports for some time can see through those types of shows. In reality, this bout is a highly skilled elite boxing champion fighting a mixed martial artist in the squared circle.

Look a little closer, and you’ll see a contrast of age, experience, and size.

Mayweather May Have Lost a Step…or Two

Having already admitted he’s ‘lost step,’ Mayweather’s age is becoming a factor. Last competing when he was 38 against Andre Berto, a certain amount of ring rust may also be present for ‘Money.’

During this video shot by FightHype.com, Mayweather appears completely shattered from a late night training session. Perhaps it’s some mind games, or maybe the boxing great really is feeling the gruelling effects: 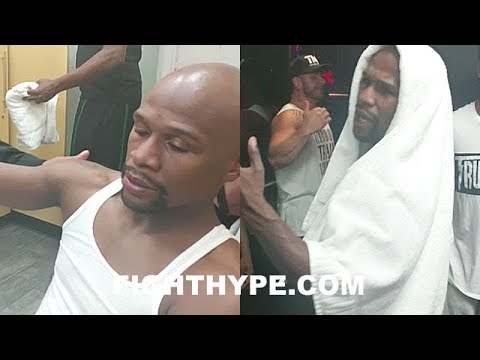 Speaking with ESPN.com, Mayweather furthered the trail of thought that he’s over the hill. Considering the perceived gap in skill, as McGregor is not a boxer, could ‘Money’ be planting a seed of doubt on purpose?

“I used to have a 90 percent knockout ratio,” Mayweather said of his punching power early in his career. “It’s obvious I slipped somewhere. Something has taken a toll on my career.”

“I didn’t say I couldn’t fight. I just said I’m not the same Floyd Mayweather I once was.”

“This can’t be a defensive fight. I have to go to him,” Mayweather said of McGregor. “I owe the public because of the Pacquiao fight. They weren’t pleased with that. They’re gonna be pleased with this fight here.”

Interesting read, but as mentioned is Mayweather simply trying to up the buy rate? Maybe if ‘Money’ had spoken this candidly during the world tour, instead of screaming ‘YEAAH’ every 30 seconds, the ticket sales for August 26 wouldn’t be struggling as much.

WATCH: People Are Saying This Fighter is Conor McGregor’s Clone

Darren - Feb 2, 2019 0
The Resemblance is Ridiculous... Not Just in Appearance but Also in Fighting Style and Body Mannerisms... Meet Conor McGregor 2.0 From Germany... Conor McGregor is...

Why is Conor McGregor Fighting at Welterweight?