What Do You Do When The Fight Is Just Too Easy? If You’re Khabib Nurmagamedov You Talk To Dana White…

Khabib Nurmagamedov put an absolute pounding on Edson Barboza at UFC 219 last Saturday night. In fact he was so good that he actually had time to shout at the UFC President Dana White between rounds. The scorecards reflect just how dominant he was, reading 30-25, 30-25, and 30-24 respectively.

The Dagestani came forward at a relentless pace, preventing the dangerous Brazilian striker from getting into a rhythm. When “The Eagle” took Barboza to the ground, he unleashed a ferocious ground and pound upon his helpless opponent. It was claustrophobic and suffocating as Barboza looked totally bemused and lost throughout the fight.

After a year out, and a UFC career riddled with injuries, he clearly wanted to make as strong a statement as possible. He did this metaphorically in the cage and literally, by shouting to Dana White from the cage.

Javier Mendez just said to Khabib in between rounds: “this is fantastic. Tell Dana you love him.”

Too Easy, Too Good

Nurmagamedov’s actions brought to mind his previous appearance against Michael Johnson. During that fight he similarly punished his opponent with such brutal efficiency that he was able to casually shout at Dana White. On Saturday night, his coach Javier Mendez was so delighted with his fighter between rounds that he can be heard saying:

“This is fantastic! Tell Dana you love him!”

Khabib duly obliges and in the video footage below can be heard roaring at Dana who responds:

“What do you want to talk about?”

When asked at the post-fight press conference what he was saying to the UFC President, Khabib made it very clear. He said:

“After first round I tell him, Dana you want to talk with me? He said yes let’s talk. I think about… let’s do this one more round like this and after I want to say to him something. And after second round I say what you think about performance and he say I’m sure you’re going to take this.” 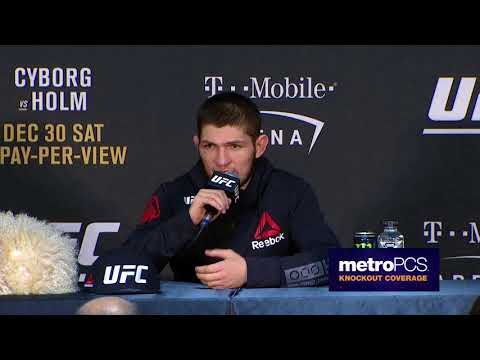 At this rate Khabib is surely only a fight at most away from a title shot. He’s pulverising opponents in fights, beating Conor McGregor on Twitter, and making sure that Dana White knows all about it. Basically he’s doing everything right.

It will be interesting to see Khabib’s next move. There are three likely scenarios. The first is that McGregor versus Ferguson is finally booked and Khabib waits. Number two is that McGregor is stripped/vacates and Khabib fights Ferguson. The third possibility is that Khabib switches division in the meantime while the other two sort themselves out.

Khabib made it clear that he wasn’t showboating. He said

“This is not trash talk. This is the real deal.”

After such a dominant display it’s impossible to mistake his words for anything but the truth. The 25 -0 Russian fighter is even closer to finally getting his shot at proving, once and for all, that he is the number one lightweight in the world. It’s been a crazy ride, and it’s about to get even crazier.