Move over Bareknuckle FC. The US promotion would have you believe that they are the most brutal combat sport system in the world, but that’s simply not true. We’re not disrespecting the athletes who put their bodies and faces on the line, but we’ve got to be real: Lethwei is the most devastating striking art out there.

Lethwei, AKA Burmese bare-knuckle boxing is from Myanmar and is basically an even more hardcore version of Muay Thai. It’s like somebody said that Muay Thai was too gentle and decided to remove the gloves and add in headbutts.

The ability to headbutt your opponent is one of the most distinctive features of this crazy sport. Check out a devastating finish that happened at the weekend, and you can see just how effective a headbutt can be.

Shan Tauk KO's Petchubon in round 5 at todays Siam Kard Chuek event. Really the only way to finish when abroad. pic.twitter.com/OUtdZgrV54

Is there a better way to beat somebody than by torpedoing your head into their skull? Shan Tauk sent Petchubon straight to the shadow realm with an absolute missile of a headbutt at the Siam Kard Chuek event in Thailand. You can almost feel the vibration from this massive hit.

Headbutts are obviously not legal in MMA now, but should they be? When it comes to certain rules and banned moves, commissions appear to be more concerned about appearances rather than the actual amount of damage that will happen. What’s more dangerous: a spinning back heel kick to the temple with the force of a sledgehammer or a short-range headbutt? 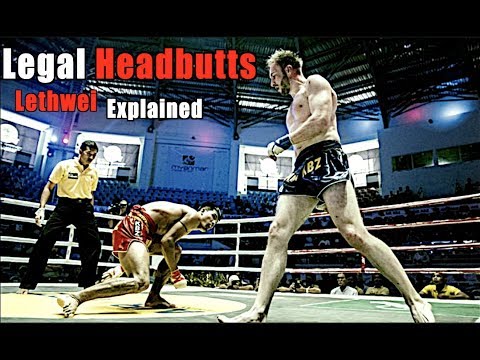 Despite the clip above demonstrating how effective a well-timed headbutt can be, it’s actually rare enough that a headbutt KO happens in Lethwei. Usually, they are used to stun the opponent, causing them to lift their hands up. Then you can follow up quickly with an elbow, or attack the body.

Mistiming a headbutt can be very dangerous because you open yourself up. Especially if you’re launching yourself forward with power like Shan Tauk does above. All it takes is for the opponent to see it coming and bang – you’ve been smashed to the ground.

Another problem is that you could actually injure yourself by headbutting somebody. Lethwei fighters risk opening up cuts on their own faces which can affect their performance for the rest of the fight, or even stunning themselves. It’s a dangerous move if used incorrectly.

Lethwei as a martial art is growing in popularity. As more and more fighters from across the globe search for new ways to make money, an increasing number of international combat sports athletes are flocking to Myanmar to take part in open weight competitions.

While many Myanmarians are unhappy with foreign fighters coming in and winning, they’re also proud to see this devastating art receive some attention from across the globe. The likes of highly successful Canadian champion Dave Leduc have helped to achieve the balance between tradition and modern promotion.

Darren - Oct 28, 2019 0
Tyson Fury says he's considering making his MMA debut... The Gypsy King is one of the most popular boxers on the planet. While he doesn't...

Six Martial Arts That Will Get You Killed In Real Life

What Are These Weird Training Methods That Conor McGregor Is Using?