Legendary Boxer Manny Pacquaio is One of the Greatest Boxers Ever to Step Into a Ring… Now His Son Has Put on the Gloves Competitively for the First Time, as He Made His Amateur Debut…

Manny Pacquaio remains the only 8 division champion in the history of boxing. He’s beaten the likes of Miguel Cotto, Oscar De La Hoya, Ricky Hatton, and Juan Manuel Marquez, to seal his place as one of the sport’s most influential and remarkable athletes.

‘The Pacman’ is truly a unique fighter. In his native Philippines, he’s an active senator in the government and has also played basketball professionally, only retiring in 2018. Add in his countless video game, film and TV appearances, and it’s fair to say that he’s possibly the most recognizable East Asian athlete on the planet.

If you’re one of his kids, then you’ve definitely got a lot to live up to. Enter his eldest son, Jimuel, who just made his own boxing debut. The young boxer fought at amateur level for the first time, going two rounds, which you can watch below.

In the footage above, you can see Jimuel take on Lucas Carson in a 2 round amateur bout at Budnikov Martial Arts Alabang, Muntinlupa City. It’s actually entertaining enough, even if it’s clear that Pacquaio Jr. has a long way to go before he develops the finesse of his father.

Throughout the first round, he launches haymakers at his opponent, who isn’t quite able to deal with his power effectively. Sporting ‘Pacman’ emblazoned headgear and groin guard, Jimuel is clearly trying to make a statement. However, he gasses out in the second round a bit, allowing Carson to land some decent shots. All in all, it’s not a bad effort from Jimuel. 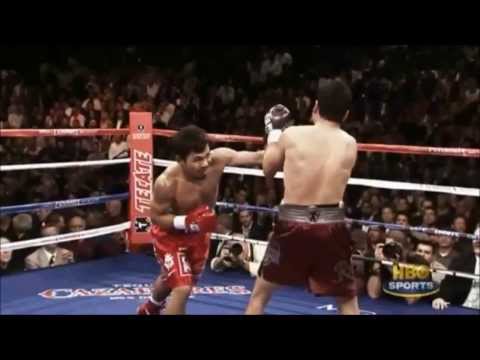 The Philippines is a hotbed for combat sports and martial arts. Not only have they produced world-class boxing talents like Pacquaio, Nonito Donaire, and Johnriel Casimero, but they’re also home to one of the most successful MMA camps in the world.

Team Lakay has produced a whole host of champions for ONE FC, while Brandon Vera is one of the most recognizable MMA fighters active in Asia today. Meanwhile, Arnis, also known as Kali or Eskrima, is the national sport and martial art of the Philippines. Recognizable for its stickfighting, it also has an international following, and has been compared to Krav Maga.

Meanwhile, after a long career stretching 70 professional fights, the end is near for Manny Pacquaio. That’s what his longtime trainer Freddie Roach told Fight Hub TV. Pacquaio wants a lucrative rematch with Floyd Mayweather to finish off his career on a high, but if he can’t get it, he might just hang up his gloves for good. Roach responded about whether ‘The Pacman’ wanted to fight Mayweather again:

“I would think that yes. But the thing is, if we can’t get Floyd we might retire. That’s definitely a possibility, me and Manny talked about it. He really wants Floyd but we’re waiting to see.”

It’s always sad to see a legend walk away, but who knows, we could see his son in the ring in a few years.