The Guvnor, King of the Bouncers and unlicensed boxing champion Lenny McLean went by many names. One thing remained constant though, he was one of the hardest men in history.

McLean’s story has been told many times, and his fight videos have become the stuff of lore. He is credited as being the hardest bouncer on the scene of London’s era of gangsters. Often linked to the Kray twins and Charles Bronson, The Guvnor was reported to have been in over 4000 fights.

East London in the 1960’s was a rough place to be for a fighter. McLean seemed to thrive in this atmosphere though. Lenny grew up in a working class family in Hoxton, London’s East End. His father died when he was just six, and his mother married an abusive alcoholic by the name of James Irwin.

This may seem a little deep to go in to the past of McLean, but he later revealed this as the reason for becoming a fighter. Lenny’s uncle, a feared gangster by the name of Jimmy Sparks, became his idol. After his younger brother was beaten severely by Irwin, Sparks intervened by brutalising the violent Irwin. McLean vowed never again to be beaten upon.

Quickly gaining a reputation for his short fuse and explosive fighting style, McLean fought his way to the title of Guvnor. One particular rivalry with Roy ‘Pretty Boy’ Shaw had the London underworld clamouring for more. Big money was bet on McLean’s fights, and he always came to perform.

In one particular fight, an opponent by the name of ‘Mad Gypsy’ Bradshaw decided to throw a head butt in the mix.

He paid a heavy price as a result: 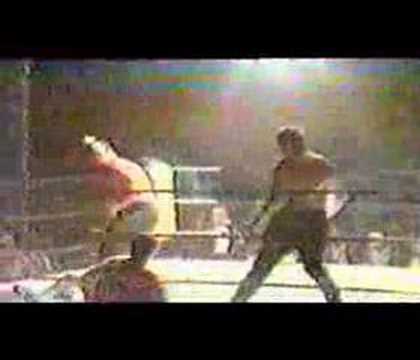 There have been a number of documentaries featuring Lenny McLean. The famous fighter even appeared in Guy Ritchie’s 1998 gangster flick ‘Lock, Stock and Two Smoking Barrels.’ Yet there hasn’t been a modern movie adressing McLean’s exploits and life.

Salvador Sanchez - Apr 9, 2018 0
Conor McGregor really stepped up the insanity for UFC 223. In typical 'Notorious' fashion, the Irishman brought massive publicity to an event he wasn't...

Khabib will be watching UFC 257 and hints he could possibly...