Muay Thai is one of the greatest martial arts on the planet. Joe Rogan always goes off on a rant about why he can’t understand why kickboxing and its variants are not more popular in the western world. When you look at Muay Thai – even if just stripped back the traditional ceremonial elements – it’s so entertaining.

Elbows and knees, combined with vicious punches and kicks make this one of the brutal martial arts on the planet. Many MMA fighters use it as their striking base because it’s so solid and teaches how to use every legal attacking tool. The very best Muay Thai fighters fight in stadiums like Rajadamnern and Lumpine.

If you doubt the quality of these madmen who devote their being to this combat sport, check out this head kick from the weekend. It’s absolutely devastating. 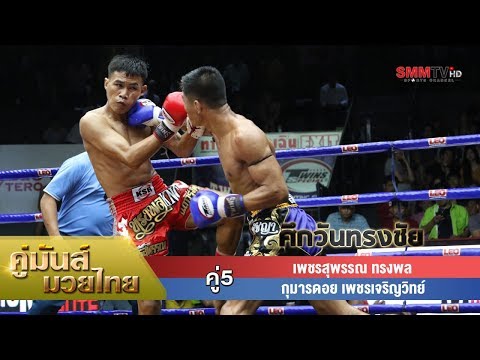 Phetsupan Por Daorungruang is the  Rajadamnern super-flyweight champion. He was defending his title against Kumandoi Phetjaroenvit, a familiar foe. The pair had fought three times before with the champ coming off the better twice. The two men have very different styles.

Kumondoi is a savage who will just march forward and go for the finish. Phetsupan, on the other hand, doesn’t possess the same athletic gifts. He’s very smart though and has an excellent fight IQ, allowing him to produce exciting finishes out of nowhere, in entirely unexpected ways. However, sometimes power overwhelms technique as the champion found out.

Only just caught up on #UFCStockholm and seen this headkick from hell! Listen to that impact.

Glad Jimi Manuwa is ok. He was asleep before he hit the floor. Aleksandar Rakic is a problem for any light-heavyweight in the world. pic.twitter.com/upig2o02QG

That’s what happened at the weekend when the champion was knocked out by Kumondoi with a vicious dropkick. It was literally that because the challenger punched Phetsupan, who got jelly legs and lost balance. As he fell, Kumondoi smashed him in the head with a skull-shattering kick. Out cold.

The only comfort that Phetsupan will take from this is that he is still the champion because the fight took place at a catchweight. We’re assuming the challenger missed weight in this case. However, that is not the way you want to lose. That kick surely changed him for life.

HOLY SMOKES! 🔥 Valentina Shevchenko knocked out Jessica Eye at #UFC238 with one of the most devastating kicks you’ll ever see — or hear (sound up)https://t.co/sxTLnUskzi

We’ve seen some mad head kicks in the last couple of weeks. UFC flyweight champion Valentina Shevchenko destroyed Jessica Eye’s soul with a baseball bat of a shin at UFC 238. She literally bounced it off of her challenger’s head and the sound reverberated around the arena in Chicago. It took ages for Eye to come back to her senses in terrifying scenes.

A week before, Jimi Manuwa was flattened by Serbia’s exciting light-heavyweight contender Alexander Rekic. This fight was done and dusted in less than 20 seconds. The UK fighter retired afterwards because of the amount of damage he’d taken in his last few fights. Those were scary scenes.

It’s funny that you’re not allowed to do a 12-6 elbow in the UFC, but you can literally bash your shin or heel off of somebody’s skull. Combat sports are not made for the faint-hearted.