Although mixed martial arts is the ultimate test of combat, it hasn’t always been that way. Back in the day, martial artists would often test their styles in the streets. Even Bruce Lee, the Godfather of the UFC and modern martial arts would fight it out in the street.

Why though? What was to be gained? Before the growth of MMA, this was really the only way to find out who had the ‘superior’ art. It wasn’t until the teachings of people like Lee that we realised a mix of all styles was most efficient.

Teachings of master such as Lee, the Gracie BJJ family, and many other modern gurus had lead to people disregarding the older styles. More traditional martial arts such as Karate and Kung Fu are far less popular in 2016.

Without these older arts, no MMA or UFC would even exist today. It’s with the teachings and fundamentals of traditional martial arts that all modern fighting is built on.

Shaolin vs. Taekwondo Video Below

Shaolin monks, although primarily known for their resistance to pain, are also highly disciplined martial artists. In the subject of today’s video, the monk in question displays excellent speed and footwork.

Facing a Taekwondo master from Morea, the Chinese monk has to overcome the rapid fire kicks of his opponent. Not only does the monk defend himself, he also lands the only real contact during their bout.

Here’s the video, remastered for your viewing pleasure. 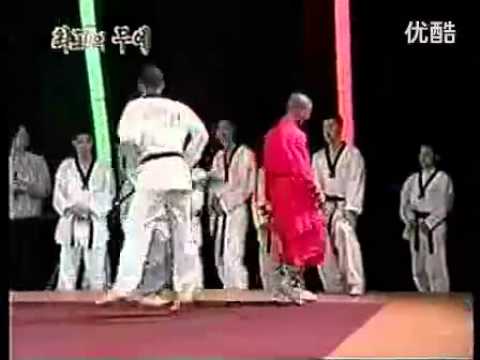 In the second part of the video, we see an amazing blinfolded spinning kick. The Shaolin monk tears up a strip of the carpet with his crazy stick work demo, and we also see some very awkward interviews.

You can watch the second part on the Youtube player below, thanks for stopping by, be sure to check out some of our content while you are here!

why is so many martial artists lacking character?

why are there so many schools at conflict with each other?

why are so many students at odds with their own teachers?

why are schools that come from the same Master at conflict with each other?

Buddhists say our real enemy is ourselves. It is our insecurity, pride, and fears that drive us backward. The battle of the inner and outer will continue all our lives. If you don’t center on the core of your problem there will be very little benefit derived from any training.

One Cardinal rule of the traditionalist – is never to bring dishonor to his family, himself, his teachers or his art. He knows his duty lies in continued learning and the passing down of his art to the next generation while preserving the core of his teachings from radical changes.

The traditionalist does not take part in disputes and controversy. He remains quiet in the storm of clashing egos. He is not concerned with fame, money, and fan fare – who is best, or who is first.

Traditionalist – the best approach is no approach, simply draw back to the middle of the road. There we can move in any direction.

In Shaolin – mistakes are the mother of learning.

The skillful person strikes the blow and stops, without taking advantage of victory.

Bring it to a conclusion, but do not be vain.

Bring it to a conclusion, but do not be boastful.

Bring it to a conclusion, but do not be arrogant.

Bring it to a conclusion, but only when there is no choice.

Bring it to a conclusion, but without violence.

REPORT: Darren Till Arrested for Stealing Taxi and Trashing Hotel

Darren - Apr 21, 2019 0
'The Gorilla' Has Allegedly Been Arrested in Tenerife for Allegedly Trashing a Hotel Room With His Mates... Oh and Stealing a Taxi...  This time last...

Legal consequences of sustaining work in an unsafe workplace may damage...