There was incredible drama at the UFC 221 weigh-ins in Perth. Yoel Romero was meant to fight Luke Rockhold for the interim middleweight championship. However, disaster struck when the Cuban fighter missed weight at both his first and second attempts.

The self-professed ‘Soldier of God’ initially came in three pounds heavy, weighing 188 pounds, rather than the cut-off of 185. He was given two hours to cut the remaining weight but barely shed anymore, coming in at 187.7 pounds.

Luke Rockhold met the weight limit without any hitches. He stood on the scales, coming in at 185 pounds on the dot. UFC 221 has been a nightmare for the organisation’s top brass. The original main event was scrapped when middleweight champion Robert Whittaker contracted a dangerous staph infection.

Yoel Romero weighs in at 188 (!) and things get spicy at the face-off between Romero and Luke Rockhold! #UFC221 https://t.co/EuGiqVpiJE

However, further drama unfolded when the pair faced-off after the weigh-ins. They squared up to each other and had to be separated as they tried to get physical. Rockhold told Justin Gatlin:

“Look I’m a professional. I play this game right in every sense of the word.”

The weigh-in results have further implications. The fight was officially confirmed after Rockhold agreed to improved terms. Intense negotiations took place at a hotel near the Perth Arena. However, only Rockhold can win the interim title. If Romero defeats Rockhold, there is no interim belt, and Robert Whittaker remains the undisputed champion.

Should have be doing the salsa in the sauna. Some bullshit as usual

Their war of words continued on Twitter. Rockhold wrote:

“Should do some salsa in the sauna. Same bullshit as usual.”

It’s fair to say that the former middleweight champion is not happy right now. Romero has a patchy history in the UFC with regards to observing regulations. Although this is the first time he has come in overweight, he previously served a six month ban for a failed drug test. He has also been criticised for cynical recovery tactics during fights, most notoriously against Chris Weidman. 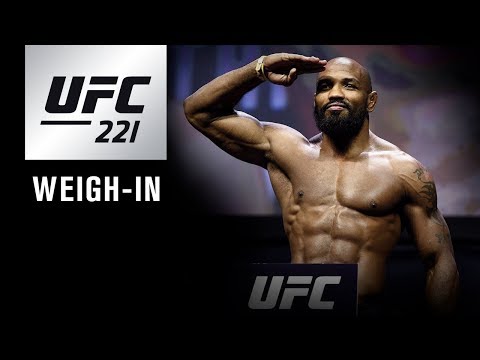 Show Must Go On

The remainder of the card’s fighters all managed to make weight, including heavyweight contenders Mark Hunt and Curtis Blaydes who are fighting in the co-main event. Jussier Formiga did miss weight initially, however, he met the flyweight limit on his second attempt and is cleared to fight.

UFC 221 takes place in the Perth Arena, Perth, Western Australia. It’s the first time the organisation has come to the world’s most isolated major city. Let’s hope the rest of the event proceeds smoothly. Home fans will be excited by their local fighters Mark Hunt and rising heavyweight star Tui Tuivasa. The full weigh-in results can be seen below:

Transforming your passion for boxing into your small business

Sugar Ray Leonard Explains Why Mayweather vs. McGregor Is Garbage