Youtuber, Jake Paul and former UFC welterweight champion, Tyron Woodley just shook hands to make the bet official. The bet was that the loser will have to put I love (the winner)’s name on his body permanently. Jake Paul has always offered bets to his opponents like trying to double their fight purse if they somehow beat him. 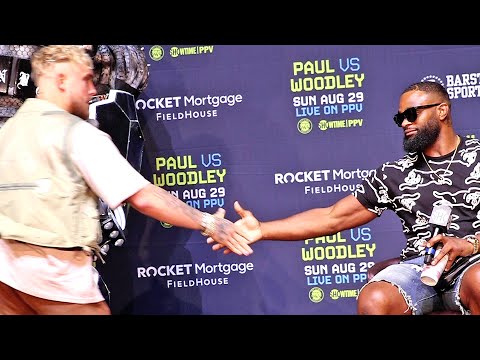 Jake Paul initially offered Woodley to double Woodley’s fight purse if he wins but if loses he needs to donate his purse to Paul’s charity. Woodley just responded with his signature line of “I beat yo A$$”. Now that both fighters had their first conference, they now have an agreed bet outside of their contract. It is certainly harmless but it is something that the two competitors motivate to win at all cost.

It is great for the media as it sells the fight even more. One other thing that sells is the storyline, Woodley is looking to avenge his friend, Ben Askren’s loss. During the Paul vs Askren fight, Woodley was in charge with watching Paul’s hand wrapping, it was at that moment that Paul and his team trash talked Woodley.

Do you think Jake Paul has what it takes to beat a former UFC champion, Tyron Woodley? Another thing worth noting is that what version of Tyron Woodley is showing up on fight night? Obviously it won’t be the champion Woodley but still he has that dynamite right hand that could end the fight.

Gentleman Jeff - Oct 27, 2017 0
Ronda Rousey's back and she's looking really good... Ronda Rousey hasn't made too many public appearances since her UFC 207 loss to Amanda Nunes 10...