Khabib Nurmagomedov recently spoke to reporters about the possibility of fighting either Tony Ferguson or Conor McGregor in the near future. Naturally, Khabib continued his talk of wanting to face both on the same night but he also dropped a bombshell about how much it would cost to get him in the cage with Conor.

Discussions regarding Khabib’s next fight actually began during his bout with Edson Barboza at UFC 219. As he has done in the past, Khabib used his time in the octagon as a chance to speak with the UFC President, Dana White. Here is what Khabib would later tell the press he said to White during the fight:

“After the 1st round, I tell him ‘Hey Dana, you wanna talk with me?’ and he says, “Yes let’s go’ and I think ‘let’s do this 1 more round like this and after I want to say to him something’. After 2nd round, I tell him, “What do you think about performance?” and he say, “I’m sure you’re going to take this”.

Khabib made other statements to Dana between rounds which can be seen and heard in the video below:

Khabib to Dana White at UFC 205

UFC 219 was not the 1st time Khabib spoke to Dana in between rounds during a fight. The undefeated lightweight did the same thing at UFC 205.

“I talk to Dana in between rounds. I said, ‘Hey, don’t send me no more of your fake contracts, I need real contracts. ‘ So he said, ‘Hey, you have to finish this fight.’ I told him, ‘You already know I deserve this. After this fight, you need to send me a real contract.’ And then he told me to go finish it. After I finished fight I told him I’m waiting for agreement; maybe in Brooklyn, UFC 209, why not? February, UFC 210 in Las Vegas. Anywhere, it doesn’t matter. Russia, Ireland, I can fight in his backyard, anywhere. I know all of you know I deserve this.”

While Dana White and the UFC’s official stance regarding the lightweight division is that it is carrying on as if Conor is not coming back, there is still the possibility of a massive bout between Conor McGregor and Khabib Nurmagomedov sometime in the next few years.

Both Conor and Khabib have spoken positively about the idea of facing each other in Russia in front of a huge live crowd. One rather large obstacle working against this potential bout, however, is Khabib’s high fight pull-out percentage, which could make promoting such a fight a risky investment for the UFC and Conor. Should Khabib manage to make it to the cage without issue for a few more bouts in a row, however, this could change. 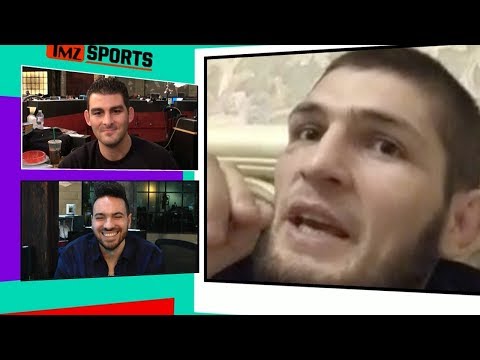 Speaking with TMZ reporters, Khabib had the following message to Conor McGregor:

“Everybody forgets about (Conor) because he doesn’t want real fights. He fights with only 45-year-old Floyd Mayweather or marijuana guy (Nate Diaz) who lose 10 times in UFC, Nate Diaz. This is crazy, he has to defend his belt!”

When reporters asked Khabib how much it would cost to get him in the cage with Conor, here is what he had to say:

” I need Tony and Conor on the same night.”