The rematch of Deontay Wilder against Tyson Fury was probably the biggest boxing fight before the world shut down due to the pandemic. The PBC Promotion just uploaded the full video on their YouTube channel and is free to watch. 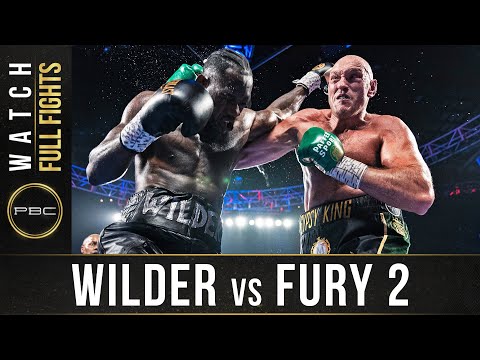 Fury proved that the first fight was not a fluke and he is clearly the better fighter. Most people, other than the 2 judges in their first match, thought that Fury won the fight but it ended in a controversial draw.

In the build up of the fight, Fury switched camps to Kronk Gym and work a strategy that would work well in his fight against Wilder. He said that in order to win, he will not give it the hands of the judges to decide the winner.

Kronk Gym is known for their volume jab to set up power punches. It is difficult to read, and very effective when used by long, rangy fighters. Most notable boxers who used this style were Thomas Hearns where he is known for the flicker jab and Wladimir Klitschko, known for his jab and clinch style although it was a boring style, it was sure effective.

Fury realized in the 12th round of their first fight, Wilder could not fight on retreat or backpedal, so Kronk gym fits him well. Many thought it was a bad move since it was just a few months before the big fight. It turns out , it wasn’t since Wilder suffered a few knockdowns and could not recover leading to a corner stoppage.

In the first round of their rematch, you can see that Fury advanced immediately, he is always great in using feints. The main adjustment he did was he advanced more often and giving constant pressure to Wilder. It may have caught Wilder off guard.

The second round, Fury began to read Wilder’s range and timing and landed a few combos. It was a great back and forth and as most fans were at the edge of their seats since Wilder’s right hand is at maximum power.

The first knockdown came in the third round where it was the beginning of the end of Wilder. He got clipped in the ear that started bleeding. It was probably the most important punch of Fury as it led to Wilder’s equilibrium being gone. It was just a matter of time for Wilder to go down.

Wilder was on defense mode all through out and Fury was just piecing him up. He suffered another knockdown in the fifth round with a body punch, he was not really stunned but rather out of balance. He still had no legs, and can barely throw a punch.

The sixth round was just a total beatdown, even Fury toyed with Wilder a bit with a little bit of showboat. The corner decided to throw the towel in the seventh round as Wilder was trapped in the corner just covering to block the flurry of punches from Fury.

Fury was declared the winner via TKO and the only belt that Fury never got, he has now gotten it which is the WBC belt. He became the lone undefeated heavyweight champion of the world.

How fast can I feel the effects of Kratom Capsules?

Scrapdigest - Aug 18, 2021 0
Kratom is a natural supplement that has become increasingly popular in recent years. It comes from the tropical plant Mitragyna Speciosa, which is evergreen....

Ciryl Gane wins all rounds against Rozenstruik but Dana White not...