Rizin also found a fight for Garcia in April of this year, against Anna Malyukova.  Both fighters were competing in their second MMA fight and were 1W-0L at the time.  The fight took place at 200lbs and this time Garcia would win with a 2nd round submission (kneebar).

The problem is now finding other women athletes of her size.  It is a similar problem as to what the UFC faces with Cyborg; a talent pool not deep enough at her weight class to base a division around.  As a result, the best you can do is a few catchweight fights while you wait for new fighters to establish themselves at that weight.

In the meantime, Gabi has mentioned that she would be open to fighting a man, and there is some talk that Rizin could make it happen.  The obstacles of doing a man vs. woman fight anywhere that is governed by an athletic commission are far too great to ever be accomplished, but they’ve put on some strange fights before in Japan.

Check out the powerful Gabi Garcia sparring in this video: 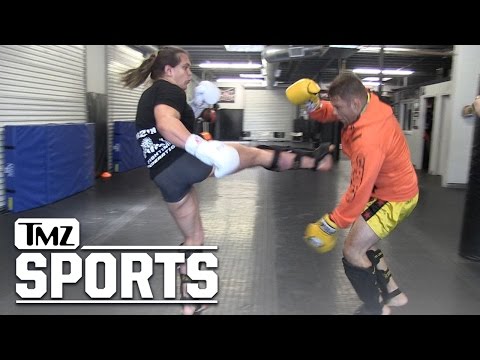 Rizin has a 16-Man (or maybe a woman as well) tournament scheduled for September, which is said to feature Cro Crop and Wanderlei Silva.  It wouldn’t be outside the realm of possibility to potentially one day include Gabi Garcia in such a tournament.  If you think such a thing is impossible just look at what DREAM did with the Super Hulk Tournament.

Demetrious Johnson gets KNOCKED OUT, Yan and Sterling reacts