WATCH: Steven Seagal Would Have Attacked Team McGregor Too…

The aftermath of the UFC 229 brawl is still rumbling on. Everybody has given their two cents on it, and now martial arts film star Steven Seagal has told Submission Radio exactly what he thinks about one of the most notorious incidents in the recent history of the UFC.

After beating Conor McGregor in violent fashion, Khabib Nurmagamedov decided to celebrate by eagle swooping feet first off the cage and attacking the Irishman’s teammate Dillon Danis. This ignited a brawl that was the culmination of a bitter feud between the two camps.

Watch the full interview below. It’s fairly obvious whose side Seagal is on, as he condemns McGregor for his badmouthing. 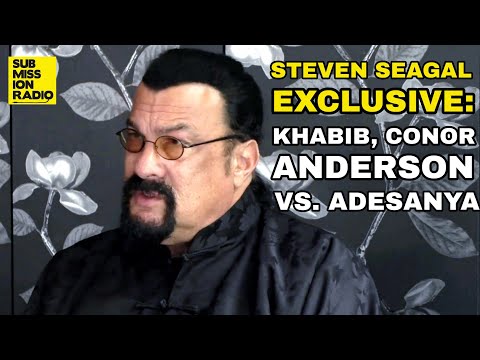 Seagal – alongside everybody else watching – recognized that Khabib was a million times better than McGregor on the night. Currently, he is Russia’s Special Envoy to the US and was awarded citizenship by Vladimir Putin in 2016.  The film star also holds a Serbian passport, as well as one from his native US. He has outspoken political views and has called Putin one of the world’s greatest leaders. Seagal stated the obvious:

However, Seagal made his allegiances clear when he said that McGregor went too far with his trash talk. The Irishman went beyond his usual wit to target Khabib’s family, religion and region. In many people’s eyes, he went a bit too far and it backfired when he lost badly to the Russian, who ruthlessly dispatched him. Seagal said:

“Do I condemn him for what he did after the fight? No. Even as a diplomat I will say no. If you badmouth someone’s family, their wife, their children, their mother, their father, their country, their religion, all bets are off, and I would have done the same thing.”

It looks likely that McGregor and Khabib will both be eligible to return in April, after being hit with retroactive bans. However, the UFC lightweight champion has said that he will refuse to return before his teammates Abubakar Nurmagamedov and Zubaira Tukhugov return from their one-year suspensions.

UFC President Dana White says that he wants Khabib to take on Tony Ferguson and McGregor to fight Donald ‘Cowboy’ Cerrone. The winners would then take each other on, with the dream for the UFC being a rematch between McGregor and Khabib. It seems like ‘The Notorious’ has to appear to earn that title fight though, and his team are openly enthusiastic about taking on ‘Cowboy.’ Expect more drama in the 155lb division.