Francis Ngannou might be the scariest MMA fighter on the planet. We’re not saying the best – sure he can be taken down and wrestled until he gasses out, as Stipe Miocic proved. But in terms of sheer one-punch power, he’s absolutely terrifying. Ask Cain Velasquez, Alistair Overeem and Curtis Blaydes. They probably don’t remember.

One of the world’s other great knockout artists is Deontay Wilder. The WBC champion is unusually lean for a heavyweight, but possesses fearsome power, with 40 of his 41 wins coming by KO. Getting punched by ‘The Bronze Bomber’ is a soul-destroying, head-separating experience.

Having been with the UFC almost since the beginning, Rogan has seen a legion of fighters come and go. He knows talent when he sees it and believes that Francis Ngannou has the attributes to succeed as a professional heavyweight boxer.

“Mark my words, if Francis Ngannou decides to jump ship and go to heavyweight boxing, he will nuke some fools,” Rogan said on a recent episode of the Joe Rogan Experience podcast.

“It’s going to take a long time to get to Wilder’s level,” he added when countered by his guest Brendan Schaub. “Wilder’s a world champ. He’s undefeated. Francis Ngannou’s not ready to box with Wilder right now, but let me tell you something… he might connect. Wilder’s not the slickest guy in the world. We’re not talking about Muhammad Ali or Floyd Mayweather. He mostly gets by on power and range.” 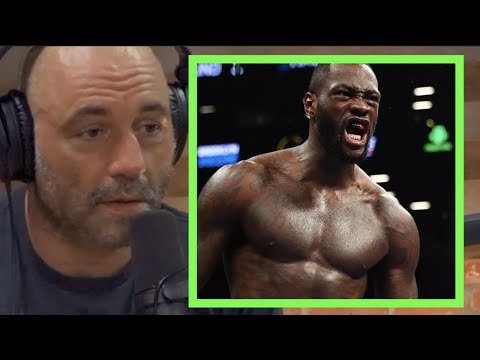 Rogan further made the case by talking about Ngannou’s disgraceful raw power. He melts people that are put in front of him. It would definitely be fascinating to see how he would cope against a legitimate boxer. He continued:

“Francis Ngannou, everyone he connects with other than Stipe [Miocic], goes night night. Stipe is the only guy. Stipe figured out how to use his championship mettle, use his grit, use his takedowns, and won the fight.”

Of course, we’re never likely to know just how good a boxer Ngannou could be. It’s worth noting that before he even knew that MMA existed he wanted to be a boxer. That was why he originally left Cameroon for France. Now he’s set to take on the very dangerous former champion Junior Dos Santos.

Who are the best boxers in the UFC?

WATCH: Boxer Attacks His OWN Coach After Losing Fight