If you call out Joe Rogan, don’t be surprised if he answers…

As most MMA fans know, Joe Rogan isn’t just a stand-up comedian who landed himself a cushy job commenting on fights, he has a legitimate martial arts pedigree. Rogan is a blackbelt in jiu-jitsu from Eddie Bravo’s 10th Planet Jiu Jitsu in California.

If you call out Joe Rogan don’t be surprised if you get choked out as a result in other words.

Over the years of serving as host of his own popular podcast and as a commentator for the UFC, Rogan has built up a large fanbase. Longtime UFC fans however, may have reason to worry that Rogan’s days calling MMA bouts may soon be over.

Joe Rogan signed a 1 year contract with the UFC last summer, meaning only months remain on his current deal with the promotion. Neither the company nor Joe Rogan have commented on whether he will be signing a new deal.

Adding to speculation that Rogan may not be with the company much longer are multiple negative comments he has made regarding WME-IMG. Rogan has been critical of the company’s entertainment-first approach to managing a MMA promotion. He has also commented on his podcast that he would prefer to do his “Fight Companion” podcasts over broadcasting from the fights live.

Rogan also saw the departure of his longtime friend and broadcasting partner Michael Goldberg earlier this year, as the company neglected to renew his contract at the end of its term.

Back in 2011 there weren’t as many internet trolls as there are today, but they were out there. The troll in question here opted to challenge Joe Rogan on his MySpace page. Rogan happened to drop in on his training to take him up on his challenge in response. 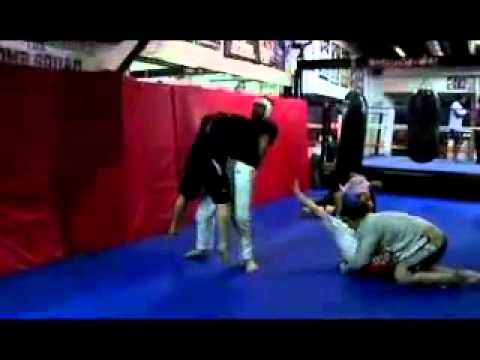 That’s what the guy gets for trying to be an internet tough guy! Luckily for this guy MySpace wouldn’t be around much longer.

Darren - Jan 18, 2019 0
The Former UFC Bantamweight Champion and Pioneer for Women's MMA is Starring as Sonya Blade in the Latest Installment of Mortal Kombat... It's a match...

Nate Diaz Blasts UFC For ‘Putting Him On The Shelf’