Daniel Dubois is still young and green so it will be a huge risk in fighting someone as good as Joe Joyce. Even Boxing Promoter, Frank Warren has said this will be his biggest risk in giving Dubois the fight.

It is common for boxers to build up more fights to gain experience. Although Dubois, has more fights, Joyce has more experience inside the ring.

Joyce won the 2013 European Championships (bronze), 2014 Commonwealth (gold), and 2015 European Games. He is a much more experienced boxer but experience comes with age. Joyce is already 35 years but in heavyweight the age-prime is different.

George Foreman won the heavyweight title the second time when he was 45 years and 102 days. But Foreman had the strongest power and hardest chin so he can get away with getting punched and punching back.

Both fighters are undefeated, so it will always be interesting since fighters always want to stay undefeated. Somebody’s 0 has got to go is the best way to describe the fight coming in.

Joe Joyce was the one interested in fighting Dubois due to the popularity of the young boxer. The fight has the British, Commonwealth, Vacant European, and WBC Silver heavyweight title. 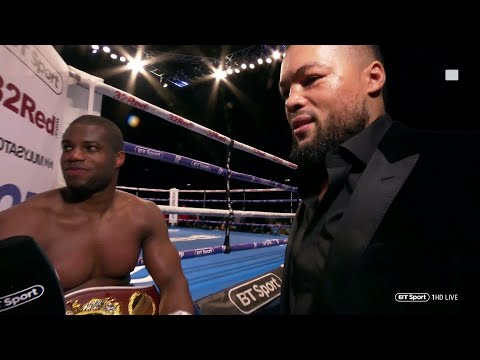 The titles that they are fighting for are not the biggest or major titles in the boxing world but winning these elevates them into fighting the top contenders of boxing.

Stylistically both fighters have the tools to beat their opponent but the question is how and what type of fight will happen. Dubois is younger, faster, and more athletic but it does not mean that the boxer will win. Joyce is more experienced and is patient in picking his shots. Joyce is a much bigger boxer but Dubois is believed to be stronger due to his athletic talents.

The interesting point to know is Dubois fights best when he advances and not yet proven when is on the backfoot. If Joyce makes Dubois step on the backpedal, it might show some weakness in Dubiois’s game.

When Fury was asked if he sees Dubois fighting him in the future, he said that probably not because when Dubois is going in his prime, he himself might be retired in the sport.

The bad blood is also there in the fight, that is one of the factors why people watch boxing. It makes the fight more interesting since there is much more to lose other than the titles and record.

Dana White: Tony Might Not Get the Next Title Shot

Darren - Jun 8, 2019 0
Tony Ferguson is Arguably the Best Lightweight on the Planet Right Now Based on His Winning Record... However, Even if he Beats Fellow Contender...

Things to Consider When Eating at Westgate Restaurants: Brotzeit