Mark Hunt has competition for his spot as the funniest hater of PED-users. Derrick Lewis’ latest Instagram target was Brock Lesnar and it’s pretty hilarious.

While Lewis might possibly be angling to get himself a fight against Brock, his post points out that Lesnar’s biggest threat takes place outside the cage. Namely, can Brock Lesnar pass a USADA test?

Brock Lesnar defeated Mark Hunt at UFC 200 only to have the results later overturned when he tested positive for Clomiphene. Despite the failed drug test, Lesnar dominated the kickboxer and kept him on the ground for the duration of the fight. If he can pass a USADA test, Lesnar’s proven draw on PPV would be great for the promotion as well.

Lesnar’s failed drug test from UFC 200 is the subject of an ongoing lawsuit between Mark Hunt and the UFC. Hunt contends the UFC conspired to allow Lesnar to compete while using PEDs. Last summer, A judge dismissed a UFC motion to dismiss the lawsuit. 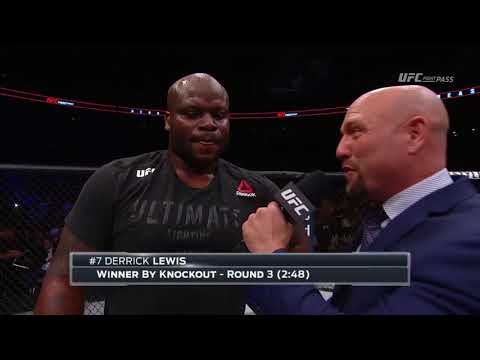 Derrick Lewis and Brock Lesnar have a few things in common. One is that they each have a history of ridiculous post-fight interviews. Lesnar famously bashed a sponsor at UFC 100 and then proudly professed he “might even” get on top of his wife that night, it was that special of an occasion. His wife is the former Sable of WWE fame, by the way.

Lewis has earned a fanbase simply because fans want to see him win so he’ll say something ridiculous in the post-fight interview.

Following his last bout, Lewis expressed joy over his wife ending a sex-ban she’d placed on her husband due to previous comments he made about Ronda Rousey.

“I’m going to try and rest up a little bit so I can be strong in the fourth round with (my wife),” the New Orleans native said.

“I’m going to knock it out of the box.

Derrick Lewis is a definite possible opponent for a Brock Lesnar UFC comeback fight. Although a rematch with Mark Hunt while there is still ongoing litigation regarding their last bout, is arguably a fight which should be considered as well.

Brock Lesnar has still not served his entire suspension stemming from his UFC 200 failed test. He technically retired from MMA a year ago, taking him out of the USADA testing pool. If he comes out of retirement he will have to serve a further 5-month suspension.

While Lesnar is a performer with World Wrestling Entertainment, he is not subject to the company’s Wellness Program. As a part-time performer, it has been reported he is not drug-tested by WWE.

This means Lesnar has been free to ingest any substance he chooses for the last year. If he unretires he will have to pass USADA tests for at least 4 months before fighting, however, which wasn’t the case last time.

The Lakers have major changes in their roster

John - Nov 26, 2020 0
The defending champion Los Angeles Lakers will be changing their role players. Their starting line-up will not be the same coming to the season....