Conor McGregor has been doing plenty of trolling on social media lately. This time, ‘The Notorious’ is taking aim at Frankie Edgar, whom the Irishman claims he wanted to fight at UFC 222…

Going ahead with a title fight in the main event, this weekend’s UFC 222 card was in jeopardy after Max Holloway pulled out. The featherweight champion was set to defend his title against Frankie Edgar in the headlining bout.

Citing injuries, ‘Blessed’ was removed from the top spot on March 3, replaced by Brian Ortego. Cris Cyborg agreed to fight on three weeks notice against Yana Kunitskaya for her second featherweight title defense. The bout was inserted as the new main event.

Although no longer in the headliner, Edgar’s fight with rising prospect Ortega is still an exciting one. During last night’s UFC 222 open workouts, Edgar looked typically sharp while displaying his striking skills. 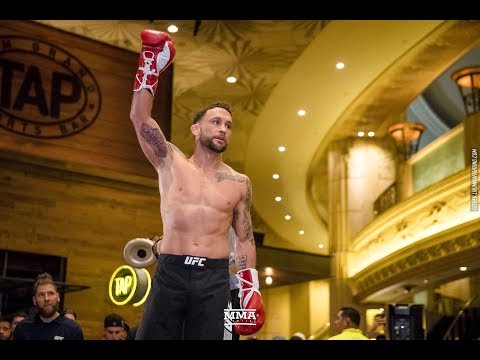 Ariel Helwani posted the video of Edgar’s boxing on Twitter before McGregor responded with some typical trash talk.

Here’s what the Irishman thought of Edgar’s striking skills:

You are all handy bread. https://t.co/yM9qFUrH19

Indeed, McGregor may believe he has the drop on Edgar and other featherweight/lightweight contenders, but when is the comeback going to happen? McGregor had claimed he requested to fight at UFC 222 against Edgar:

I am fighting again. Period.
I am the best at this.
I put my name forward to step in at UFC 222 to face Frankie Edgar when Max Holloway pulled out, but I was told there wasn’t enough time to generate the money that the UFC would need.
I was excited about bouncing in last minute and taking out the final featherweight, without all the rest of the stuff that comes with this game.
Please respect the insane amount of work outside the fight game that I have put in.
On top of the fighting.
I am here.
It is on them to come and get me. Because I am here.
Yours sincerely,
The Champ Champ™

Needless to say, Edgar called BS on this claim: