OK, now this would be a game changer…

When Georges St-Pierre vacated the UFC welterweight title back in 2013, he did so in a cloud of controversy. During his split decision win over Johny Hendricks, many felt GSP had lost on the scorecards.

Citing loose drug testing and personal issues, ‘Rush’ would retire amid a media frenzy. Although constant rumours about a big comeback would circle in the coming years, it wasn’t until 2017 that GSP’s return was confirmed.

Among many other changes, a new era of drug testing had emerged in St-Pierre’s absence. Was it a co-incidence that Hendricks’ form had dropped since USADA came to town? Even St-Pierre himself had loosely made statements about ‘Bigg Rigg’ in this regard.

Either way, GSP was back, but he wasn’t gunning for welterweight glory again. This time he’d be matched for an immediate middleweight title shot against champ Michael Bisping. Great for the people benefiting from the pay-per-view numbers, but terrible for the division.

Similar to the trend made popular by Conor McGregor, now Georges St-Pierre was part of a money fight. Top contenders Yoel Romero and Jacare Souza were furious, but their complaints fell on deaf ears.

Speaking during an interview with Fight Hub TV this week, Roach lays out the preparations for GSP’s return. The famed boxing trainer also says the plan is to beat Bisping, then drop down to face the UFC’s golden boy Conor McGregor:

“That was the fight that was offered to us, through Dana (White). (He asked us) ‘do you want him?’ And we all thought about it, and we all said yes. With the last fight, we’re hoping (for it) to be (Conor) McGregor.” 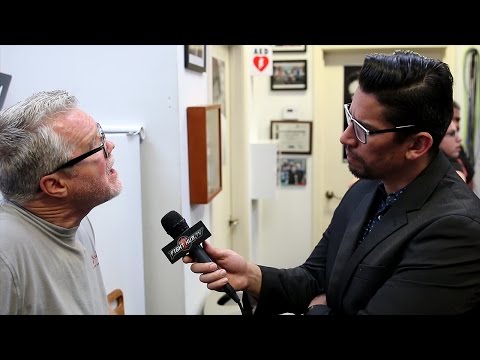 Salvador Sanchez - Dec 22, 2016 10
This would literally be the biggest event the UFC would EVER hold... Nearly every pay-per-view event is now described as the 'biggest in UFC history.'...

Dana White Reacts To Ronda Rousey Getting Knocked Out At UFC...

Cyborg: “UFC Is Full Of Douchebags”, Conor McGregor Is “A Piece...