Possibly the greatest fighting moment of all time…

Many people have disputed the efficacy of mixed martial arts over the years. Most of the time, these people end up eating their words down the line. In particular, its those who challenge MMA fighters in their own realm that pay the heaviest price.

Back when UFC veteran Duane Ludwig was short in the tooth, he was fighting around the regional circuit. In the future ‘Bang’ would be known for his time in the UFC, and for coaching at Team Alpha Male.

Although only fighting for the fourth time in MMA, back in 2000 Ludwig was an experienced Thai boxing and kickboxing champion. At King of The Cage 4, Ludwig was paired with an unlikely foe in Shad Smith.

As you’ll see in the video later in the article, Smith was way out of his depth.

When he faced Ludwig back in 2000, Smith only had two MMA fights to his name. Claiming he was a street fighter. Smith seemed to talk a big game. As the commentator at KOTC 4 mentions, Smith said he’d had ‘over 1000 street fights.’

Unfortunately for Smith, his fight with Ludwig would go down in MMA history as one of the most hilarious fighting moments.

Watch on the Youtube player below, and check Ludwig at 2:30 with the Karate Kid crane kick stance: 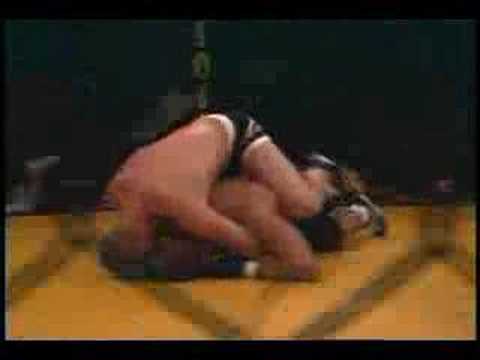 Later fighting in the UFC, Ludwig would retire before becoming the Team Alpha Male striking coach. After the infamous TAM-TJ Dillashaw split, ‘Bang’ would coach Dillashaw exclusively in Colorado.

Against Shad Smith, Ludwig demonstrated the difference between a tough guy, and an actual mixed martial artist. Props to Smith for taking on such a dangerous and experienced fighter, but it proved to be a case of training against a street fighter-An almost inevitable outcome.

“It’s something that entertainers do,” said Ludwig. “Rather than fighters and martial artists.”

Ludwig continued, “[Cruz] prefers being in front of the camera talking instead of doing, he’s just used to that routine. He’s not a martial artist, he’s a combative athlete like a handful of today’s MMA fighters. I don’t consider them martial artists, but combative athletes, they’re lacking discipline… well, maybe not discipline, respect, I’ll say that.”

“One important aspect which people haven’t caught onto yet is [Dillashaw] being able to fight in both stances and the transitions in between,” He said. “He’s a modern day ninja, there is no one at T.J.’s level. Period.”

“It’s not a similar style though, because they both switch their stances, Cruz does it to be defensive, and run around into positions so he can time takedowns, and T.J. switches stances so he can attack and can do whatever he needs to do when we need to do it. So, it’s a bit of a different rhythm. Cruz is not fluid in both stances.”

Darren - Oct 5, 2018 0
It Wasn't Just Conor McGregor And Khabib Nurmagamedov Getting Up Close And Personal at the UFC 229 Official Weigh-Ins... Two Fans Went to War...

The Lakers have major changes in their roster

Six Martial Arts That Will Get You Killed In Real Life

Rapper With Tattooed Eyeballs Returns Against Another Huge Bodybuilder

Manny Pacquiao vs Errol Spence Jr is OFFICIAL for August 21