Moments later, Anthony Johnson weighed in at 203.8 pounds. Strangely, this was the same margin under the limit as ‘DC’ had gone over. Literally two minutes later, Cormier was back on the scales and had dropped from 206.2 to 205 even.

After appearing to grab the towel during his second weigh-in attempt, Cormier sparked huge debate. But the madness wasn’t over yet.

That’s Pearl On The Left… 🙂

Smoking hot woman’s strawweight Pearl Gonzalez was told she wasn’t able to fight because of her breast implants. No, seriously.

Gonzalez was finally cleared after Dana White had words with the commission. Here’s her intense staredown with Cynthia Calvillo:

And here it is from the other angle, just because. You’re welcome. 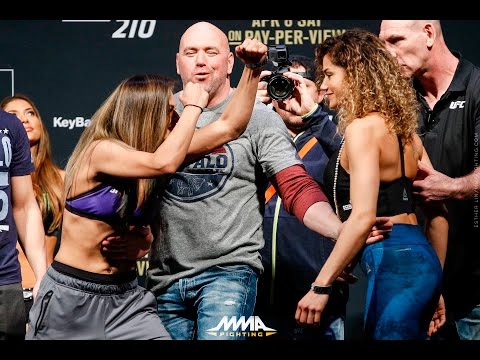 With all the towel and booby related madness behind us, we can settle in for a weekend of UFC pay-per-view action in New York.

Will ‘DC’ choke ‘Rumble’ again, Will Chris Weidman bounce back, will Pearl Gonzalez’s Reebok kit hold her ample bosom in? All these questions will be answered in the Big Apple this Saturday.

WATCH: Floyd Mayweather Linked to HUGE Comeback After This Video