A full video of Conor McGregor’s insane attack has been released by the UFC. In one of the most ludicrous moments in the history of the organization, the ‘Notorious’ and at least twenty other men entered Brooklyn’s Barclay Center and attacked the UFC 223 red corner fighters’ press bus.

The video is absolutely spectacular for all the wrong reasons. McGregor can be seen going insane. His group of goons is like a pack of rabid dogs, launching dollies, barriers and trash cans at the vehicle.

One of the most interesting aspects of the video is the response of the fighters. Michael Chiesa is seen with a deep laceration on his forehead. His reaction and that of Rose Namajunas, who was almost smashed by dolly, reminds you that these fighters are just ordinary people. Check out the video below.

McGregor’s gang come storming into the parking lot of the arena. The Irishman is seen throwing everything he can at the bus, with security desperately trying to intercept him. He can be heard rallying his troops, before running away into the night. He shouted:

The whole attack only lasts for a couple of minutes, but the sheer numbers involved and the intensity of the violent goons really brings home how mad a moment this was. It’s impossible to know what they were thinking. The cameras were rolling the whole time. Everything they did was captured on film and can be used in a court of law. 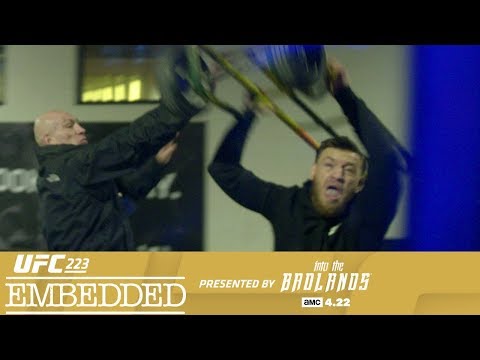 Unfortunately for Conor McGregor, this isn’t over. He was held overnight in Brooklyn’s 78th Precinct. After a court appearance yesterday, the Irishman was released on bail of $50,000, paid for by his friend Dillon Danis. Cian Cowley, another Irish fighter involved in the assault, was given bail of $25,000 dollars.

McGregor was charged with three counts of criminal assault and one count of criminal mischief. He has been allowed to leave the country but must return to face trial on June 14th. Make no mistake, the ‘Notorious’ could face jail time for this, with a maximum penalty of seven years for assault. However, NYPD sources claim that cases in this category are discretionary.

The most obvious problem for McGregor, if he gets a conviction of any sort, is that he will not be able to get a work visa to work in the USA. Regardless of whether or not he serves time, this could mean that options like Hollywood and the WWE will be out of reach forever.

Meanwhile, the UFC has yet to take action against him. McGregor’s teammate Artem Lobov has been dropped from the UFC 223 preliminary card, and some action is expected to be taken. He can also expect a whole bunch of individual lawsuits with Michael Chiesa definitely pursuing legal options, and Ray Borg expected to go down the same road.

The worst part for fans is that he was in line to sign a new contract within the next couple of weeks, to face Khabib in Russia. Let’s be real, that fight could still happen. However, his bargaining power has gone way down now, after the sheer insanity of these events.

Gentleman Jeff - Aug 10, 2016 0
Not too long ago 22-year old MMA bantamweight Stephen Cervantes was 6W-0L and on his way to a likely successful MMA career. Now he...