This celebrity bodybuilder, we use both terms loosely, claims he is going to knock Conor McGregor out on December 9th…

Matthew Kline Kader is rapidly getting a reputation as one of the biggest trolls in MMA. Back in June, Kader became known among MMA fans for his ruthless trolling of Cody Garbrandt.

Kader claimed he was going to show up to the UFC bantamweight champion’s gym for a street fight. Garbrandt was more than accommodating to the challenge, and the two arranged a date and time, June 25.

Garbrandt stayed for hours at the Team Alpha Male baser in Sacramento, CA, waiting for Kader. It wasn’t until ‘No Love’ left the area that Kader showed up. No doubt simply searching to sponge off Garbrandt’s name, Kader eventually did little more than talk sh*t.

Talking is what Kader is now becoming renowned for. Bodybuilding by day, and sack talking by day and night, he’s now taking aim at Conor McGregor.

Although it’s likely BS, there’s a shred of every MMA fan that actually wants Kader to run into McGregor. Should he actually be stupid enough to fly to Dublin, watching this clown get dumped by ‘The Notorious’ would provide days of entertainment.

During the Mayweather vs. McGregor fight weekend, August 26, guess who was in Las Vegas. Yes, Kader was floating around talking smack just hours before the fight was scheduled to start.

Kader Claimed He Was Going to KO McGregor, or One of His Fans

The KING ???? has arrived! Hopefully this bum shows up or if I see a Irish lad that is a McGregor fan then I’ll fuck them up instead!

Here’s the video of the ‘fight’ between Kader and an Irish Conor McGregor ‘fanboy:’ 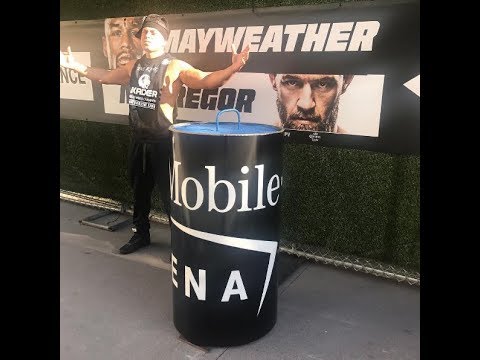 This Irish McGregor fan boy got the same treatment that his hero got from Mayweather on Saturday night. Conor, here’s some footage for you and your coaches to study. Study it all you want but it won’t change the power of my right hand. On December 9th if your coward ass wants me at a certain weight then just say it and I’ll cut to 155 NO PROBLEM! You can come in at 170 if you want! Cause I know that’s how you UFC guys like to do it. But I don’t give a FUCK about those coward entertainment rules.

Look what that small little man Floyd Mayweather did to you! Imagine what I will do to you when I connect on your chin!!! After what happened to you on Saturday I do feel a little sorry for you and I don’t wanna ruin your career anymore then Floyd has. So If you apologize for using the word juice head then I’ll let you off the hook if not then December 9th I’m gonna drag you to Croke Park and give you the worst beating of your life. #LightsOut the #RealWorldChampion is coming ???????? #Undefeated

Atilano Diaz - Jan 4, 2017 0
Apparently, no one told Bellator rising star Michael “Venom” Page that kicking an opponent when he/she is down is frowned upon. The up-and-coming fighter...