Conor McGregor will fight again in a week. The Irishman will come back after over a year on the sidelines. If his team are to be believed then he has regained his focus and is sharper than ever. He will need to be because his opponent Donald Cerrone is no joke.

With exactly 50 fights on his record, Cowboy is the definition of a veteran. He’s the opposite of McGregor because he’s so active compared to the Irishman. The Notorious will have to be at his best to get past his American adversary, especially because the fight is at welterweight.

McGregor has already moved his camp to Las Vegas in preparation for UFC 246. You can see some of his scintillating training footage below. Check out how he lets loose on the pads. However, is his ground game up to scratch? 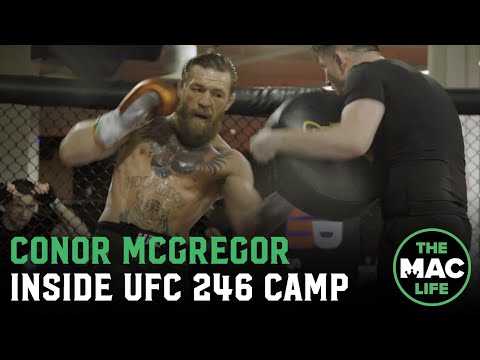 Despite the fact that he’s likely giving up a weight advantage, McGregor is convinced that there is no chance Cerrone beats him. In fact, he told Aerial Helwani that that’s exactly why the fight is at welterweight. He doesn’t feel the need to deplete Cowboy when he is going to beat him anyway. Those are his words. He said:

All we know is Cowboy is going to be coming out like a bucking bronco. Will McGregor rue his words?

The Notorious explained why he chose Cerrone in particular. In short, he believes that it will be an action-packed clash that fans will love. Both men prefer to stand and strike so hopefully, he’s right. Although, it would be hilarious if Cerrone just went full wrestler on him. McGregor’s ground game is his Achilles heel.

“It’s an exciting bout,” he said. “It’s a fan-friendly bout, it’s a fight that excites me.”

McGregor added: “It’s gonna be a good night, and I’m gonna shine here on January 18. I’m gonna create magic in the Octagon like I have done many times before, but this is gonna be something special.”

If McGregor can get past the threat of Cerrone then we can expect to see him fight again multiple times this year. He has been linked to more fights at welterweight including against Jorge Masvidal and champion Kamaru Usman. But many fans believe that both of those men are too big for the Irishman. He told the MacLife:

“I’m looking at this as a season. This is the beginning of the season. Donald was the first one that I agreed to have a bout with, and here we are.”

Cerrone is as good a comeback fight as he could have wished for but if he wins then there’s going to be no avoiding the killers. Justin Gaethje, Khabib, Masvidal, whoever he fights will be extraordinarily dangerous. But that’s the wonderful world of MMA.

Kamaru Usman deserves to be #1 P4P not Jones