The Notorious has been teasing his return in recent cryptic Instagram posts. He’s currently in New York living his best life after basically walking away from court last week with a slap on the wrists. McGregor has to do community service, pay damages, do anger management, and keep away from Michael Chiesa for a year. Is the last part really a punishment?

He’s been hanging out with his friends/training partners Dillon Danis and Cian Cowley, living the high-life while training for his upcoming fight against Khabib Nurmagamedov. Has it been signed yet? No. It hasn’t. But Audie Attar, McGregor’s manager, has said that negotiations are in the red zone. It’s 90% going ahead right now.

Both fighters are currently training as though the fight is a done deal. Despite enjoying life in New York, where McGregor has been driving around in a DeLorean, he’s also training seriously hard – albeit with some unorthodox methods. 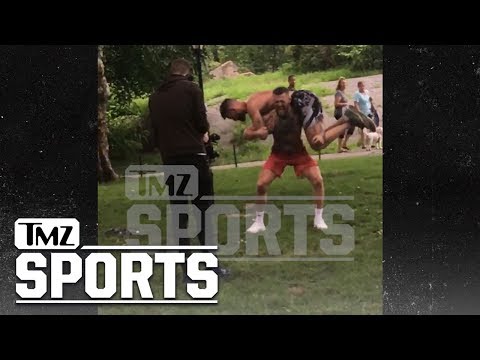 McGregor has been known to incorporate unusual routines into his regular training. Remember when he was working with  movement artist Ido Portal? He believes that having total control of your body gives you an advantage on the mats. The Irishman’s movement and footwork are exceptionally fluid, so it’s arguably helped him.

In the video above you can see him doing squats in Central Park, Manhattan. Nothing unusual about that, except for the fact that he’s literally holding Cian Cowley on his shoulder. You’ve got to admire the team’s creativity. When you don’t have access to a gym and weights, just use another person.

It’s believed that the UFC wants the McGregor vs Khabib fight to take place on October 6, in Las Vegas’s T-Mobile Arena. That’s just over two months away folks. As you can see McGregor is in phenomenal condition, so it’s clear that this has been under the table for a while.

Nurmgamedov is also currently preparing. He’s been loud about wanting to fight the Irishman, promising to rearrange his face, and put a general brutal beating on the former featherweight and lightweight champion. It’s an opportunity for McGregor to take back his title while making a tonne of money too. What’s not to like?

Both men want this fight. The major issue is how much the UFC is willing to pay McGregor. Let’s break it down. His highest profile UFC fight to date was the Nate Diaz rematch. He walked away with $3 million. Now roll forward to the Floyd Mayweather boxing match, co-promoted by Zuffa. His guaranteed purse was $30 million but walked away with closer to $100 million.

That’s the UFC’s biggest problem. They’ve created a monster. While it might seem like an astounding figure, the going rate for McGregor is going to be about $50 million dollars. Then it gets even more problematic, because what do you pay Khabib? Are we going to see a ripple effect through the UFC’s pay structure?

John - Feb 18, 2021 0
With Usman's recent win against Gilbert Burns, he has beaten the contenders from number 1 to 4 which is an insane resume to have....