Dana White is a rich man. So rich in fact, he can afford to blow money on purely impractical items. He demonstrated this recently on an episode of the History channel’s “Pawn Stars”.

Dana White appeared on the reality program in order to purchase items for his new “weapons room”. What the UFC President plans to do with a room full of weapons is anyone’s guess.

News that the UFC President is dropping large amounts of money on ancient weapons will not be warmly received by the many fighters who complain of low-pay. The UFC has come under increased scrutiny for fighter compensation ever since the company was sold to WME-IMG for $4 billion in 2016.

Not long after the sale, White tried to explain UFC’s payment system to Fox Sports:

What is Dana White’s Net Worth?

White’s salary is believed to be 8-digits annually, meaning it makes barely a dent in his overall net worth each year. Where Dana made the bulk of his wealth is from the company’s sale to WME-IMG. White is believed to have profited more from the sale than he would in 40 years earning a salary as UFC President.

How Much Did Dana White Make From WME-IMG Purchase of UFC?

White is believed to have made approximately $360 million when WME-IMG purchased the UFC. The Fertitta brothers were most likely only too happy to allow him that percentage of the purchase price. After all, it had been White’s idea to purchase the company and his work which turned it into a profitable enterprise. 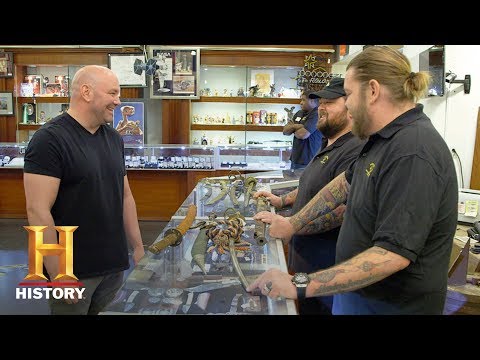 While Dana White drops tens of thousands of dollars on swords and tens of millions on other items, the issue of fighter pay in MMA continues to be contentious.

UFC heavyweight champion, Stipe Miocic, has become so disenfranchised with the promotion’s compensation for fighters that he is no longer having the UFC President wrap the belt around his waist after victories.

When asked why he had his coach wrap the belt around him after the Ngannou fight, Miocic responded:

“He respects me and I respect him. End of story”.

Miocic commented before his last fight that he knew UFC management wanted Francis Ngannou to win. He also insinuated the company is only concerned with their marketable champions.

“Listen, I feel a little bit disrespected, but I’m not going to dwell on it,” Miocic would later tell reporters.

When asked if he felt Dana White would be insulted by his decision, Miocic bluntly answered: