Unanswered Questions, Trash Talk And Nice Suits Were Just Some Of The Highlights of The UFC’s 25th Anniversary Press Conference…

The UFC’s 25th Anniversary Press Conference took place at Madison Square Garden on Friday night, before the UFC 220 ceremonial weigh-ins. The intention of the conference was to promote the main events of UFC 222 and 223 later this year.

It was a dramatic event, albeit a very strange one. UFC President Dana White was expected to clarify whether or not Conor McGregor was going to be stripped of his Lightweight belt. Long story short: he didn’t give an answer. Instead White gave a number of cold, muddled responses to reporters, who were left unsurprisingly confused.

That’s not to forget the fighters. Champions Tony Ferguson and Max Holloway were present, as were their challengers, Khabib Nurmagamedov and Frankie Edgar. Ferguson and Nurmagamedov openly displayed animosity towards each other. Edgar and Holloway also threw verbal digs at each other, but with a much more relaxed tone.

Practically every reporter tried to uncover if the Lightweight Title fight was going to be for the official belt, and, if so, is McGregor going to lose his title? The closest we got to an answer was when White responded:

Naturally Ferguson and Nurmagamedov faced most of the media’s questions. They face each other at UFC 223 in Brooklyn, on April 7. When asked if he was happy with this situation, Ferguson said:

“Well they offered me Conor. Conor didn’t want to fight. So I want to fight people that actually want to sit there and fight. I’m not going to beg someone to go there and fight. This is the real fight. I fought ten fights. You guys all watched them. If not you’re a casual. Go back go watch my fights and you’ll see exactly why I have this belt. I am the champ Conor McNuggets is nothing. He’s lost his sauce. And this is the defend or vacate!”

Nurmagamedov definitely had the crowd on his side. The Dagestan fighter cut a more relaxed figure than his opponent. He was clearly enjoying himself as the crowd chanted his name. Interesting to note that if he does become champion, he already has a dedicated and vocal fanbase.

Ferguson shot back, referencing ‘The Eagle’s notorious past weight-cut problems.

It was that sort of conference.

Featherweight champion Max Holloway will defend his belt against perennial challenger Frankie Edgar at UFC 222. The event takes place on March 3 in Las Vegas. Throughout the conference the pair made jokes about each other’s chances, but there was a respectful tone to their comments.

The biggest question went to Holloway who was asked about the false missile alert in Hawaii last week. He passed it off with his usual laid back humour. He said

“Sh-t was scary as hell! Right you go to bed, you sleeping, you wake up. You see a missile coming, and they saying you got to ten to twelve minutes to get ready until a missile hits. And ten to twelve minutes go by and a missile doesn’t hit. And 40 minutes after the first thing they tell us it’s fake. Man I was angry. I was angry. But we’re in the ‘Blessed’ era, they weren’t trying to take the champ away from the world just yet baby!” 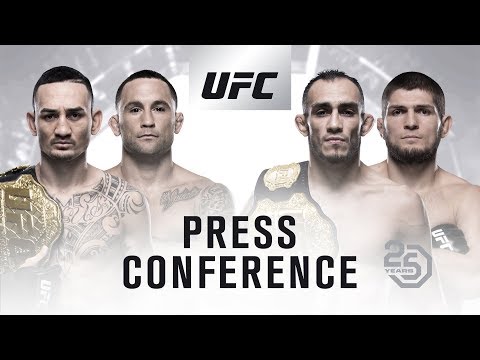 When the fighters faced off at the end of the conference, tensions ran high. Holloway and Edgar stared each other down but shared respect by shaking hands.

The Lightweight duo were kept apart by White, as they sniped at each other with angry jibes. You can see this in the video above. No love lost between either of these men. On paper both of these fights should definitely be worthy headliners.

A fascinating event, with the biggest question left unanswered. You wonder if Conor McGregor was sitting at home, a box of popcorn on his lap, just laughing at all the drama he causes this sport. Even if it is just his shadow that is doing it.

Darren - Sep 30, 2018 0
Size Does Matter... Rory MacDonald Learned The Hard Way Against Gegard Mousasi as His Dream of Becoming Bellator's first Ever Two-Division Champion Was Crushed...  This...

Dana White Has Update on Floyd Mayweather’s UFC Debut and it...