Joshua, the younger fighter by nearly 15 years, stopped Klitschko with a relentless onslaught in the 11th round.

The bout was called to a halt officially at 2:25 of round 11 after Joshua knocked down Klitschko twice and had him out on his feet the third time.

The victory allowed Joshua to retain the WBA, IBF and IBO heavyweight titles.

It was a career defining victory for Joshua who has taken the heavyweight division by storm since becoming a professional in 2013. Although the 41-year-old Klitschko more than held his own. Joshua simply proved to be too much to handle in the later rounds.

“I’m not perfect but I’m trying, and if you don’t take part, you’re going to fail. If you don’t take part, you fail. Boxing is about character. There is nowhere to hide. No complications about boxing. Anyone can do this. Give it a go. You leave your ego at the door. Massive respect to Klitschko. He’s a role model in and out of the ring and I’ve got nothing but love and respect for anyone who steps in the ring.” 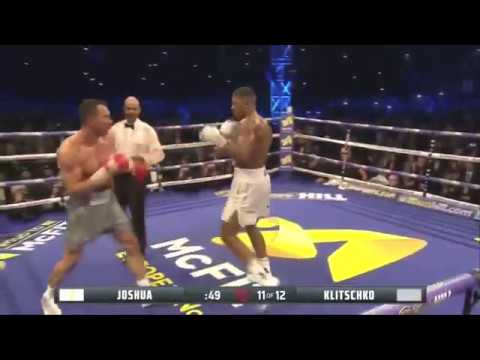 On the other hand, a beaten Klitschko offered praises for his much younger opponent in response.

“I hope you enjoyed the fight. The best man won tonight. And it’s an amazing event for boxing. Two gentleman fought each other and he was better today than I,” said Klitschko.

“It’s really sad that I didn’t make it tonight I was planning to do it but it didn’t work. But all due respect to Anthony. Congratulations.”

With the victory, Joshua sets up a possible mega bout against American fighter Deontay Wilder.

Will 2022 Be the Year That Joe Joyce Finally Gets the Plaudits He Deserves?

WATCH: Paul Craig Gets Latest EVER Finish in UFC History!

WATCH: This Insane Tornado Kick KO Needs to be Seen to...

Joe Rogan Explains Why GGG Got Robbed Against Canelo

Darren Till and Adult Actress Bid to Corner Mike Perry