This BJJ match was legitimately intense and entertaining…

Martial arts is built on respect, at it’s foundation lays discipline, honor and many other sacred core values. The modern game, however, is a far cry from the tournaments of old. Sportsmanship is still very alive, but entertainment is a huge factor in modern fighting.

This isn’t to say that all morals go out the window, but certainly in MMA they are temporarily left in check. Many consider Brazilian Jiu Jitsu as the founding art that spawned modern MMA. That said, you don’t see many truly intense rivalries in Jiu Jitsu tournaments.

One particular aspect of Jiu Jitsu in tournaments, especially in no-gi, is athleticism. Guard passes have become more acrobatic and imaginative over the years. When two competitors of similar high-level ability meet, it’s often very entertaining.

This is exactly what happened during the Polaris event in 2015. Grappling monsters Daniel Strauss and AJ Agazarm squared off in one of the greatest grappling matches of all-time. The bout was made that much better by how intense their rivalry clearly was.

Watch The Video Below

24-year old Roger Gracie black belt Daniel Strauss is quite the muscular figure. During the lead up to his Polaris 1 bout with Agazarm, Strauss had voiced his displeasure at his rival’s recent antics.

Claiming he was ‘showboating’ at the last Polaris event, Strauss promised to make Agazarm pay. After a number of heated exchanges that were shared online, the two finally met and the result was an incredible match.

Skip to 4:47 in the video to watch their intense grappling match… 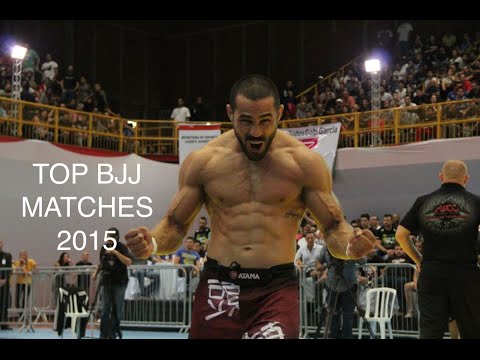 Talking to BJJStyle.com, Strauss was respectful and honest when talking of his opponent after their match:

“No, I wasn’t surprised I caught his neck a few times,” says Strauss. “The way I set up the guillotine makes it hard, no matter how you attempt the takedown, to not get your head in that position that I want. What I was also expecting, which he did incredibly well, was his movement within the guillotine. I’m not talking about letting me get under the chin, but not allowing me to get in the body position to actually finish it.

“His submission defence is obviously excellent, he’s real quick, explosive and he has great awareness and sensitivity to threat. Very difficult to submit.

“The hand under the neck, it was there every time but the one time I felt I was about to be able to go for the finish, I never quite got there because his movement was real good. He’s quick, he’s really quick but if I was 80kgs, I’d be quick as well [laughs] but you know the guy’s a wrestler, he’s compact so yeah there’s no doubt he’s going to be quick.”

Conor McGregor Reacts to Being Trolled by the Internet

Atilano Diaz - Aug 17, 2017 0
One thing you must admire about Conor McGregor is his unwavering self-belief. Whether you are a fan or not, McGregor’s confidence is legendary, and...

Dana White Lies in Court When Asked About Conor McGregor