Conor McGregor’s Head Coach And Mentor is an Elite Martial Artist in His Own Right… Here’s Some Rare Fight Footage of Him in Action… And Doesn’t That Style Look Familiar?

John Kavanagh is one of the most respected Mixed Martial Arts practitioners in Ireland. The head coach of SBG Ireland, he is best known as Conor McGregor’s head coach. But he’s so much more than that. He was the first ever black belt in Brazilian Ju-Jitsu to emerge from The Emerald Isle, and his school has produced a superb stable of fighters.

Kavanagh has been the brains behind all of McGregor’s MMA success. He’s no Edmond Tarverdyan, Kavanagh is as real as it gets and has been through the wars himself, facing adversity as a young man before building an MMA empire in his native country.

With a less than spectacular professional record of 3 wins and 3 losses, Kavanagh wasn’t the natural athlete that McGregor is. However, when he fought, MMA was in transition and only becoming respected as a sport. Below is fight footage from his early days. 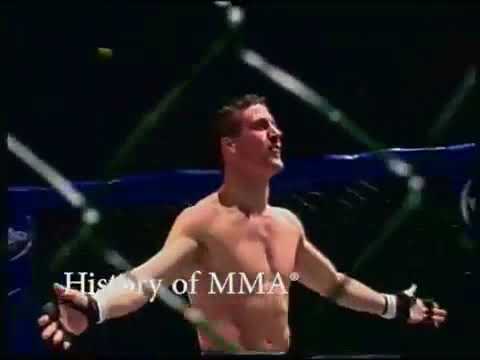 According to Sherdog.com, this footage was captured at Cage Wars 1, way back in 2003. This would have been one of Kavanagh’s last fights because he only fought six times between 2000-2003. If you’ve watched the footage you’ll have seen a dominant victory by the Irish MMA legend.

He comes out of the gates fast with a vicious leg kick, before bursting forward for the single-leg takedown. The attempt is successful and he manages to get his opponent – Tamel Haser – down to the ground.

Then it’s all about trying to establish a position. Haser recognizes the danger he’s in and scrambles desperately to get free, but he takes some heavy blows. Then Kavanagh scrambles and takes Haser’s back. He sinks in a snakelike rear-naked choke and it’s all over. Just like that.

It’s actually extraordinarily similar to Khabib Nurmagamedov’s style of fighting. Ok, we’re definitely not putting them in the same class – although arguably Kavanagh would take him down in a straight BJJ contest – if you edited Khabib’s head into this footage you might think it’s from the Russian’s early days.

He too takes his opponent down to the ground, before scrambling for top position and putting an all-mighty brutal battering on them. It’s messy, painful and unpleasant. We’ve seen the likes of Edson Barboza and Michael Johnson utterly helpless underneath him before, incapable of getting free.

If he can get the submission – like Kavanagh did – he’ll go for it, but Khabib doesn’t mind grinding out a dominant and extremely uncomfortable to watch unanimous decision. All the time he’ll be whispering in your ear to give up. And asking Dana White for a new contract.

Not only is Kavanagh, McGregor’s coach, he’s one of the core reasons behind his remarkable success. Without Kavanagh, McGregor wouldn’t even have a career. He almost gave up before the coach effectively dragged him back to the gym and encouraged him to keep going.

It’s a truly inspirational story. In their native country, McGregor might be the superstar, but it’s Kavanagh who is loved as an everyman.