The light-heavyweight division is one of the weirdest on the UFC roster. It’s got arguably the greatest fighter in the history of the promotion in Jon Jones. However, it’s also arguably one of the thinnest in the promotion. How many fighters can you name outside the top five? That’s how Anthony Smith was able to blast his way to a title fight after just three wins in the division.

Well, 205 might finally have itself a new star. Johnny Walker has everybody talking after yet another brutal finish. He put on an incredible performance to blast through Justin Ledet in only 15 seconds. This was only his second appearance for the UFC, after blasting through Khalil Rountree with crazy hellbows back in November.

Watch his insane victory below.

This fight had more action in 15 seconds than some heavyweight fights have had in five rounds. Walker literally devastated Ledet, who had no answer for his power and ferocity. The Brazilian fighter landed a body kick, before planting a hook kick on his opponent. Next was his most glorious moment when he planted a clean spinning back-fist on Ledet’s head.

He was very lucky not to connect with what would have been an illegal ground kick though. This would have been a very different article, as he would probably have been disqualified. However, he didn’t and was able to continue with ground-and-pound to finish his stricken victim. 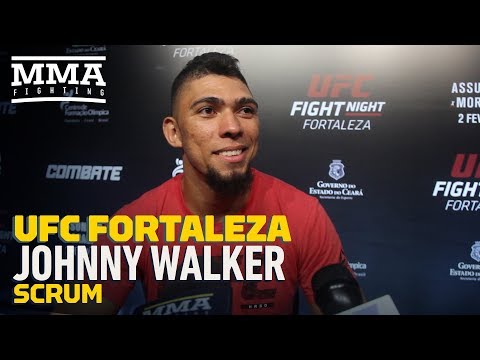 The UFC will surely have to give him a much tougher test next time out. The Brazilian looks the real deal, but until he’s tested by a genuinely elite calibre fighter we won’t know how high his ceiling is. It also goes to show that Dana White’s Contender Series has found itself some really exciting gems, with the likes of Sean O’Malley also coming through. He insisted to Michael Bisping that he had no intention of kicking his opponent in the head:

“If it (the kick) landed I think it would have hurt him but that wasn’t my intention.”

This wasn’t the only exciting finish of the night. Jose Aldo turned back time in the co-main event to demolish Renato Moicano in the second round. The former two-time featherweight champion unleashed a devastating striking clinic to brutalize his challenger before the referee finally intervened to give him a valuable win. It was a hark back to the Aldo of WEC days, and he lapped up the love of the Brazilian crowd.

In the main event, Marlon Moraes announced himself as the number one contender in the bantamweight division with a clinical victory over Raphael Assuncao. It was a rematch with Assuncao the victor in their previous victory. However, this time it was ‘Magic’ who came away with a first-round guillotine win.

John - May 4, 2021 0
It is always common to see a fighter rooting for his past opponents to win since it makes them look good. Since Jones has...

Colby Covington Tears Into ‘Delusional’ Diaz Brothers… And He Has a...