Khabib Nurmagamedov isn’t very busy at the moment. He’s waiting for the UFC to come to him with a reasonable offer for him to defend his lightweight title for the first time. The Dagestani champion won his belt in the most bizarre circumstances in April, at UFC 223.

Nurmagamedov has been heavily linked to fights against both Georges St. Pierre and Conor McGregor in recent days. If you’re speculating that the media is just making stuff up, we’re not. UFC President Dana White directly spoke about the Conor McGregor fight, while his manager Ali Abdelaziz confirmed that they were pushing for the clash with ‘Rush.’

It doesn’t seem to be bothering the UFC’s latest Russian champion too much anyway. Why would it? In the space of a few days, he had his opponent changed about four times that we know about. Nope, he’s at home in Dagestan, playing Dagestani basketball. Like everything else in this region, it’s a little bit mental but oh-so-wonderful. 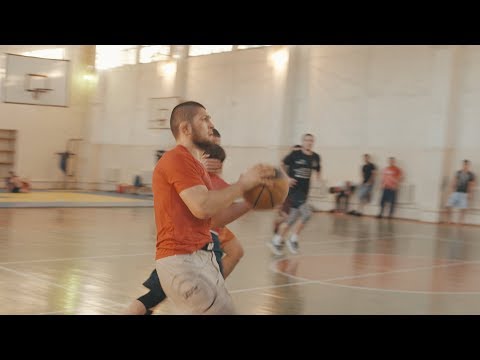 It truly is quite a bizarre interpretation of conventional basketball. Everything in this part of the world seems to revolve around making everyone better at dragging people to the ground and getting them in a position to batter them. Basketball is no different.

In the video, Khabib can be seen getting into the spirit of things. The Dagestani fighters use this version of the game as a form of warm-up. There are no traveling violations, no out of bounds, and lots of heavy physical contact. As Khabib tells the camera:

“I will show you Dagestani basketball. Only one rule: don’t hurt yourself.”

These are naturally some of the toughest men on the planet. One of my personal dreams is to for Colby Covington to win the welterweight title, and for Khabib to step up a division, get ‘Chaos’ up against the cage, and just bludgeon him for five rounds. That would show him.

One of the most interesting things about this video is that they’re all taking part in the Muslim festival of Ramadan as well. During this period of the Islamic calendar, all practicing Muslims fast until nightfall. These guys definitely don’t seem to be lacking in energy anyway. At one point Khabib literally just drops one of his opponents.

‘The Eagle’ is hoping to make his return by October. He’s remaining coy about his next opponent, but it’s fair to say that he wants to fight somebody who will validate his title. Conor McGregor is the UFC’s ideal match-up. That fight would most likely take place on October 6, in Las Vegas’s T-Mobile Arena, at UFC 228.

However, McGregor can’t be relied upon. He’s hoping to get his plea deal sorted out by next month’s court appearance, but it remains to be seen whether or not he makes his comeback this year.

Georges St. Pierre is not fit so that’s unlikely to happen. Don’t be surprised if the winner of Dustin Poirier vs Eddie Alvarez ends up fighting the champion just to keep him active. Stranger things have happened.

Atilano Diaz - Apr 18, 2017 0
Former UFC welterweight world champion Georges “Rush” St-Pierre has yet to make his much anticipated return to the Octagon since inking a massive multi-fight...