They say we all turn into our parents eventually. A lot can be learned about Conor McGregor by taking a look at his dad, Tony. McGregor Sr. hails from Crumlin, Dublin and is known to have had a tense relationship with his son during his early fighting career because he did not see it as a sustainable career option.

Fair enough, because let’s be honest: for most people, it isn’t. Even UFC fighters struggle to pay the bills. The McGregor clan doesn’t have that problem though, and Tony has been enjoying the fruits of his son’s labor for some time now.

Imagine his absolute astonishment then, when he had to use public transport in Ireland? Discovering that if you put money into a ticket machine it will give you back your change in coins? The shock. The horror. This was the situation that poor Tony found himself in. 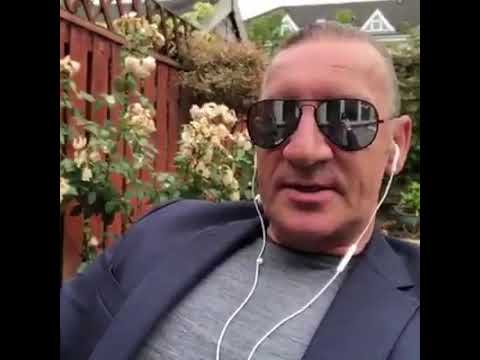 McGregor Sr. has a significant online following of his own. He pretty much spends his days enjoying life, cruising around on his boat. Fair play. But when he actually had to use a train he freaked out because he was given back too much change to put in his ‘slim fit’ suit. Seriously.

“OK, everybody, good evening, just to let you know about my travel experience on the DART this afternoon,” Tony said. “That’s the rail system that Dublin city operates. Its called the Dublin Area Rapid Transport… something like that. I was none-too-plussed with my experience on the Dart.

When I got to Lansdowne Road station I tendered a brand new crisp €20 note into the automatic machine looking for a single ticket to Dun Laoghaire. They had the bloody cheek to give me back coinage. €17.30 and a miserable little one-way ticket. They gave me all that coinage. I have no room to put those coins anywhere. I wear a slim-fit, hand-fitted Hugo Boss suit.”

Life really is a struggle, isn’t it? When your son is in the top five of Forbes top ten richest athletes in the world, and he’s cruising around in private jets. Conor should clearly have just bought the train for his dad. What a terrible son.

Maybe The Notorious has more on his mind. He’s set to visit New York this week for a court date on Thursday. The result could be massive for the UFC. If it goes his way and his plea deal is successful, then a fight against Khabib Nurmagamedov could be announced very quickly.

Anyway, the people of Ireland are very generous and took pity on Tony McGregor. Some genius reacted by starting a GoFundMe page so that Tony could get a commuter card instead of having to use cash. Basically you tap it when you go in and out of the station, and it should fit inside his nice slim-fit Hugo Boss slacks. Isn’t that nice?

“Let’s make sure Tony McGregor doesn’t find him not too plussed again. What’s this country coming to if you’re excepted to carry aloada coinage while wearing a slim-fit, hand fitted Hugo boss suit. Let’s get this money raised so Tony can get a leap card. Or we’ll have to get Aoife McGregor to give Dublin Area Rapid Transport a buzz.”

The target has been raised and McGregor Sr. will soon be able to travel without having to worry about everyone judging him about weird bulges in his clothing. Although his son doesn’t seem to mind showing them off…

Gentleman Jeff - Jul 2, 2016 0
Most of the time drug scandals in mixed martial arts involve performance-enhancers, but not always.  MMA has had it's fair share of non-PED related...

Khamzat will not be Nick Diaz’s opponent – Manager