Featuring four cities in three different countries, the MayMac world tour is in full swing. After the disappointment of the Los Angeles press conference, Floyd Mayweather and Conor McGregor turned up the heat last night.

Fans in Toronto were treated to a far better evening than the LA presser. Both men were on form, and did a great job of advertising their August 26 clash. Although a few glitches and sound problems were still there, you can’t expect much when Showtime are in charge.

And so we come to New York, and a packed Barclays Center.

The duo’s visit to the Big Apple is expected to be eventful one. The crowds have been rowdy so far, and so were the two men they’d flocked in masses to see. Having already squared off twice now, it looks like ‘The Notorious’ and ‘Money’ have found their groove.

Watch as the two clash in New York City on the Youtube player below, set to go LIVE any minute now: 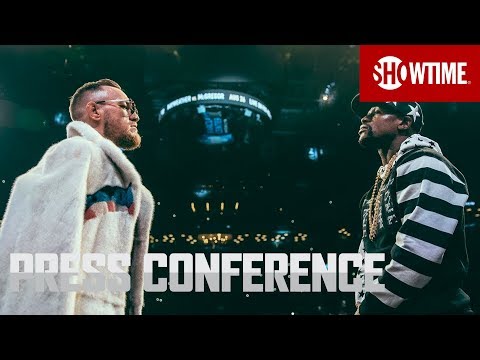 There’s just one night remaining on the world tour now. With that press conference going down tomorrow in London, England, you can expect a HUGE pro-McGregor crowd to boo Mayweather.

Not only in Ireland, but the entire United Kingdom, McGregor is huge. Obviously a lot of hardcore fans in the States have a wider knowledge, but McGregor is the reason a lot of people in England even know about MMA.

Some quotes from the Toronto & Los Angeles:

McGregor on Mayweather wanting to fight him in MMA:

“He was trying to say something about the gloves, he cried about the gloves. He was saying to me ‘UFC or MMA next.’ And he was just talking shite to me. I had fun, they cut my mic. They can do what they want, but August 26 they can do nothing to stop me.”

One More Night on Tour

Gentleman Jeff - Apr 21, 2017 0
Conor shows off his striking, publishes video... According to Conor, one of his proteges sent him a video of him hitting pads and asked for...

Joe Rogan Admits He Was Wrong About Ronda Rousey

The UFC Bantamweight Division is UNDERRATED