Alarmingly, we’ve been seeing quite a few examples of MMA fighters being put in danger by incompetent referees this year. Although this is not a new trend, in 2017 there seems to be multiple examples across the board.

Even the stars of the UFC aren’t safe. One example in 2017 was when Travis Browne absorbed a ridiculous amount of punishment from Derrick Lewis. Obviously these kind of mishaps are extremely dangerous, and also a smear on the sport.

Christian Camp, a 6-6 MMA pro, took one of the nastiest beatings at KCFA 23. After being rocked with some big punches in the stand up, Camp ate some heavy elbows on the ground in the final seconds of round one.

Unable to stand at the round’s end, Camp literally looked out of it. Any referee worth their salt would have called the fight off at this very moment. Mike England allowed the fight to go on, and had another opportunity to call it off between rounds.

The ref allowed the beating to go on, and when the second round ended, Camp was again rocked, this time clearly out cold. In a shocking moment, the referee appeared to be thinking about letting the fight go in to round three. You’ll hear the male commentator’s shock, and eventually relief when the fight is stopped.

Here’s the fight video, if you can stomach it: 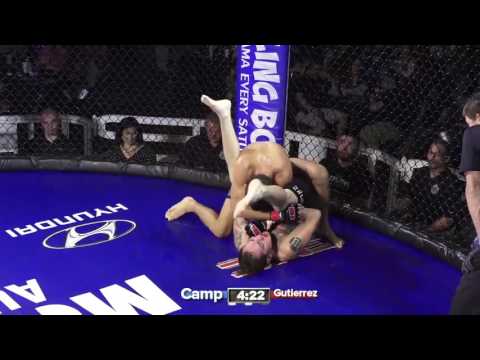 Here’s the story as first reported by DC Howard of MMA-Today.com:

“Sharkbait” had little trouble wrestling Camp to the mat at the start of the fight and spent the bulk of the first on top hammering away on his opponent. At the end of the round Gutierrez blasted Camp with a straight right hand followed by a knee to the body that dropped him against the cage. Gutierrez followed with ground strikes that knocked Camp’s mouthpiece out of his mouth and had the journeyman curled in the fetal position for over five seconds after the final bell. But Missouri local referee Mike England didn’t even check on the fighter’s wellbeing after he lay prone on the mat, and the fight continued to round two.

Gutierrez tried for the quick finish early in the second with a right high kick that buckled Camp’s knees again. The James Krause protege followed Camp to the mat and continued his positional and GNP assault, although Camp vainly continued to grasp for leglock submissions amidst all of the damage. In a rather scary scene, Camp was again unable to get off of the canvas at the bell for the second straight round. This time referee England was aware of his surroundings and the fight was finally called off at the end of round 2. Anthony “Sharkbait” Gutierrez advanced to 8-3 and picked up his first win in dominant fashion, but much respect to Christian Camp (5-8) as well for putting up a valiant effort in this lopsided short notice contest.

Olympus Is On The Rise and Handing Out The Winnings

Scrapdigest - Oct 11, 2021 0
Looking for a slot game that involves Demi-God? If yes, then you are at the right place. Play’n GO come up with amazing games...