BKFC 5 was definitely a success. The promotion is barely legal, with their events taking place so far in Wyoming, Mississipi and Mexico. However, they picked a rare weekend when the UFC and Bellator had no active cards, so were able to get a lot more viewers than normal for a highlight main event between Artem Lobov and Jason Knight.

That main event became an instant contender for fight of the year. While Lobov walked away as the unanimous victor, Knight also won plaudits for his heart as both men went to war, slugging it out, leaving each other with mangled faces. However, the professionals weren’t the only ones to slug it out on the night.

Nope. There was also a very entertaining crowd brawl in Biloxi, Mississippi too. Watch the footage below of one dude almost literally going full incredible hulk, as he devastated all who came before him.

In good old classic fight event style, there was a brutal brawl in the crowd. We have no idea what triggered it, but some proper hillbilly chaos went down. One guy let loose with his cannons, absolutely battering another man who stood in front of him. At one point it looks like he’s going to fall over the guardrail but just about stays up.

How many punches does he take to the head? He’s definitely going to have a face more bruised and battered than Artem Lobov’s and that’s saying something. Check out the pictures of Knight and Lobov below and see what taking fists to the face will do. It’s not pretty, that’s for sure.

So you wanna be a fighter?
Lobov Vs Knight
🙌🙌🙌🙌 pic.twitter.com/MlCU19V4gz

Security struggled to contain the carnage – and we mean struggled. This guy was a savage and wasn’t letting anything stop him. The commentary is hilarious as well. The dude who filmed this video definitely needs to replace Dominick Cruz in the UFC hot seat because his passion was off the rails as he roared:

We don’t know what’s better: listening to him or watching the actual fight. 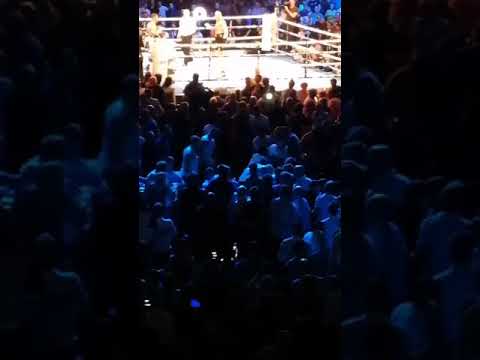 Crowd brawls are not uncommon at combat sports when grown middle-aged men become filled with testosterone from beer and self-loathing while watching the athletes below them. A famous one went down last year when Tyson Fury was fighting Sefer Seferi in his comeback fight. Fury was winning so comfortably that he actually stopped to watch the brawl go down.

A number of fan clashes also erupted between Irish and Russian fans last October in the UFC 229 fight week. Most of them resulted in the Irish lads getting mauled by battle-hardened Dagestanis. Fans have got to learn to leave it to the pros because otherwise you just look like a moron on Youtube for eternity.