When playing video games goes wrong. This kid learned a valuable lesson after trying to sucker punch his virtual opponent in real life…

Can video games cause people to be violent in real life? An interesting question that’s been asked by many ‘activist’ groups in the past. Honestly, if someone is an angry violent person, that’s just how they are.

Although computer games can depict, even encourage violence, they are after all just video games. Still, we get to see the results of people freaking out over them all the time. Just like the subject of today’s article.

Playing Call of Duty, or similar games can be a fun past time. Since Microsoft introduced a robust online gaming platform with the XBox 360, kids have been shooting and grenading the sh^t out of each other.

Unfortunately, things can go a little too far sometimes. Which brings us to the subject of today’s article.

Caught on CCTV at an internet cafe, a fight between two C.O.D gamers gets real. Apparently unhappy with his rival’s tactics on Call of Duty, the skinny guy in a vest bursts through the doors with fire in his eyes.

After unloading six or seven sucker punches to his opponent, who still doesn’t know what’s happening, the fight turns 180 degrees. Jumping into action, the sucker punched gamer beats the living daylights out of his foe.

Landing with some clinch strikes, the nerdy warrior takes the fight to the ground. Getting the full mount, he unloads a load of heavy punches to his downed opponent.

Watch the video below: 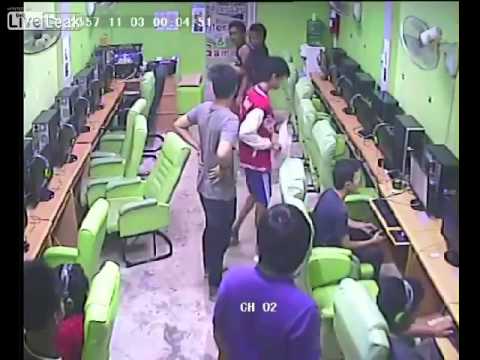 Apparently, purple shirt kid was camping on call of duty and when other kids asked him to stop he told them to ‘get rekt’ and that he’s chilling on Quan Lon Cafe if anyone has a problem. the kid in black came in to settle the score but got rekt in real life.

That was f*ckin’ HILARIOUS!

Next up we look at a classic but golden video. While he was moving house, or something involving boxes and a truck, this trained MMA fighter got in to some beef. He didn’t start it, but had the nads to finish it brutally.

The guy starting the trouble just won’t let it go. Finally, the MMA fighter snaps and slams his foe to the ground and lands a couple hard punches to the jaw. 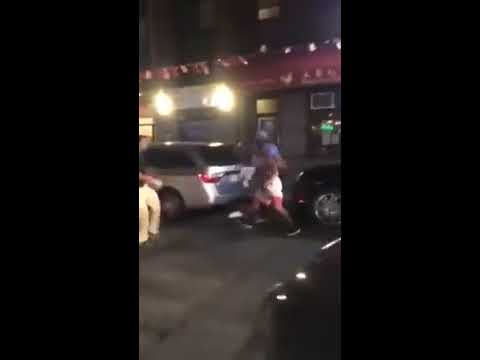 OK, so lessons that have been learned today-Don’t start a fight with anyone, regardless of how angry or upset you are. Reality is often far more brutal and harsh than sh^t you see in video games or on TV. Also, you don’t want to end up as a viral video.

Imagine starting some sh^t, getting your ass completely handed to you, then having it viewed by millions of people on the internet. That would totally suck, so do your bet to avoid it!

Salvador Sanchez - Mar 26, 2017 2
Joe Rogan lays down some wild odds for Mayweather vs. McGregor... Tired of hearing about Conor McGregor vs. Floyd Mayweather? Well, if you are, we've...