Newly minted UFC women’s featherweight champion Germaine de Randamie was met with an unexpected heckler during her UFC 208 post-fight interview with Joe Rogan inside the Octagon. An angry fan was audibly blurting out expletives at the star as she tried to explain what happened in the fight.

You can’t blame the angry fan, there wasn’t much to be happy about with UFC 208. Even UFC President Dana White said after the show that it certainly wasn’t their best. That’s code for “That show was an absolute stinker!”

While Rogan is asking de Randamie about Holm’s dangerous head kicks. The angry fan can be heard on live TV yelling to the new champion: “F*CK YOU!” 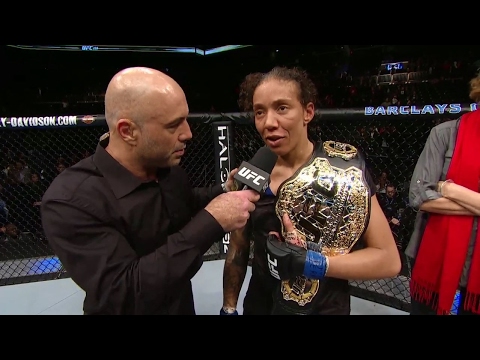 With only three known fighters in the UFC’s 145-pound women’s division. Namely Holm, de Randamie and Cristiane “Cyborg” Justino. There is only one option for de Randamie next. A showdown with Cyborg is inevitable as many fans believe the featherweight division was made just for her.

It’s no secret that Cyborg, one of the most marketable UFC stars in the promotion, cannot make bantamweight. She has tried to land a big-money fight with former UFC champ Ronda Rousey before. But because of weight issues, the fight never happened.

Darren - Jul 3, 2018 0
USADA Have Published The Top Five Drugs Searched for By UFC Athletes... Here's What They Are and What They Do... Doping has never been more...